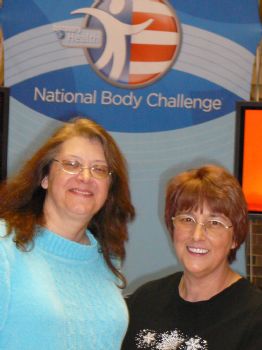 As some of you know, Tracy & I joined the Discovery Health Channels', National Body Challenge. They had a kickoff for the challenge at several malls across the country this last weekend. As it happened, one of the malls was near where we both live. Now, Tracy & I had never met, face to face. We're both on the 80's Music Lovers team together, & had become friendly. After several Sparkmails back & forth, we discovered that we have many things in common. Soooo..we decided this kickoff would be a great opportunity to meet each other, & have some fun seeing what this Body Challenge was all about. So, last Sunday we met at a restaurant that was new to me, & had a very nice, kind of healthy, lunch. After talking & eating for a couple of hours, we went on over to the mall. I thought the challenge area would be really crowded with people, but it wasn't as bad as what I thought it would be. They had us weigh in, & took our measurements. It was kind of funny, cause we both weighed on different scales, but each of us weighed 6 lbs more than our own scales at home! We each received a journal to keep track of our food intake, weight, & other info. In no way does it, or their website, even compare to Sparks...SP is soooo much better!! We COULD have taken a pic of us with a milk mustache, but we passed on that one-LOL! We knew there would be some free items, but thought we wouldn't get much,if any, cause we went on the second day. We were lucky though, & got some free gifts! They had a tae kwon do (sp?) exhibition that we watched, & they were amazing!! The best part of the day though, was to actually meet Tracy! We DO have a lot in common, & we know that we'll get together again. Either to workout, or to go shopping at our favorites stores-or.....BOTH!
Share This Post With Others
Report Inappropriate Blog
Member Comments About This Blog Post