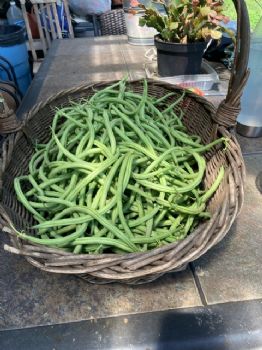 We have been bringing in a few early fruits and veggies, but as of today the harvest began in earnest. It’s hard to tell from this picture, but the picking basket is filled up and then some. I had a weird day yesterday, but I found the time to snap all these beans in preparation for steaming and then freezing… it took me about an hour. I have been meaning to get back into the blueberries and finish clean picking the early bushes. The late bushes are just starting to show color, so it will probably be another week or more before those are ripe. We have only added four gallons of blueberries to the freezer, and that’s about half the normal yield from the patch. My reticence over getting back into the blueberries is that the wasps have found the patch. I am usually pretty chill about bugs, but wasps scare me. These ones aren’t aggressive, but I tend to freak out when I grab a handful of blueberries and end up with a handful of wasps! Eep! The zucchini (the cute, round ones) are coming in. And the sweet corn and soybeans are getting close to pickable. The chard and rhubarb are coming in dribs and drabs. I have had a couple of salads with baby chard as the greens, as well as having some steamed with spinach. It always astounds me how far down the greens cook. A big potful turns into a couple of cups cooked greens! I love eating fresh veggies this time of year… Wherever you are in the world I hope you have a marvelous day!
Share This Post With Others
Report Inappropriate Blog
Member Comments About This Blog Post