An eventful day en route to the vet-- 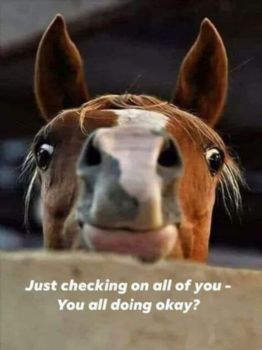 That was because our daughter had me purchase a tether , for a car seat really, from Amazon-- and it hooks onto the back of the back seat--- and Beau could not climb over to the front set, nor could he go to the back where Tess was-
- That Tether is amazing--It is strong--

So--We had a good trip there, but--(There is always that big "butt"!)- The vet would not allow us to go in with the dogs--
Lord love a Duck!--I thought all that was over with!

"We have had 2 shots", I told the wee girl who came out to get Beau--
"But we are waiting for everyone to get 2 shots," she replied.
I wanted to say to her, "well, that will never happen"----but, I kept the mouth shut---
She went to take big Beau from me, and I knew that she could never hold him as he was about to bolt--
I walked Beau to the door--

When it was Tess' turn, the vet brought Tess back to the car saying, "It was difficult to examine her as she is so skittish."
AGAIN I WANTED TO SAY, "NO GUFF! If I was with her she would've been better"-----but--again, the mouth remained closed!

So all went well---- I managed to purchase a rocking chair for the dock (for me)- -a new sun hat-- and a wee home-made bench, made out of a tree trunk-- to place on the way to the dock.

And----There is more to tell yu!
On the way home, there were 2 Police Cars , with their lights rotating, beside a crashed up SUV---blood all over the highway---
Apparently the Lady Driver had hit a moose--- and had to go to hospital--- about 15 minutes ahead of us , near noon--- an unusual time for a Moose to be crossing a major highway---

The thought did cross my mind, that if I hadn't been shopping, it might've been Himself and I -
Moose on Northern Highways are so dangerous--
I called Son #3 the Policeman and he said he heard the call come in--
Someone took the moose away-- (for food)--and the Driver would be OK--

We are VERY happy to be back home--
Tess and Beau are too--
No Mother Robin tho--- nor Pappa Robin nor Baby-- WE do miss them.