The excuses were ready

I've started running again this week and yesterday I had planned another short outing, a break from work to regenerate. That was the plan but as the morning wore on the excuses started creeping into my mind.

It's super hot out.
Too nice, the trails will be crowded.
Lots to do still, can't spare the time.
Too bad you can't run at dawn because of the amount of bears right now.

Ok, that last one I stand by as valid.

Something happened though that had perfect timing, I got a message from a SP buddy asking me how it was going and if I was going to get out for a run. I thought of listing off my excuses but I really did want to go for that run so I put them aside and told her I was going out shortly.

Right after that a friend of mine stopped by and I gave her a birthday present, a runners starter pack. We hike all the time and I know she's wanted to dip her toes into the race pool so I bought her a running belt a sports bra and offered to sign her up for her first race. Then I made my mistake. She was thrilled for the gift and asked how long the race was. I gave her the two options I had already picked out, one was a 5K the other was 12K. I let her know that you don't have to run the entire way, you go at your pace even if you walk the whole thing. I then joked, or you can start with the half marathon, I really want to do one.

Apparently turning 62 hasn't dulled her math skills. Her automatic response was no but I could see she wanted to say yes so I reminded her we hike almost that far now and this was a flat trail.

We're walking the route on Tuesday so she can see how she feels about doing the half. She's decided it would be bragging rights to start her running program with a half, this is why we're friends.

After she left I grabbed my own water belt, filled the water bottles and headed out to a quiet trail where I only ran into a couple of other runners. It felt wonderful and I was very happy that I went. It's amazing how a little, "How's it going" can be all we need now and then. 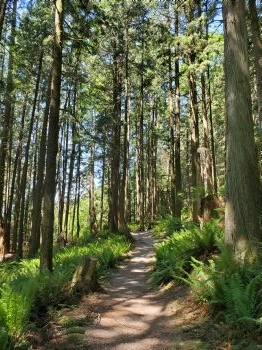