Harry is spiffed up!

Friday evening, during a zoom, Harry received his bow tie. He now looks very formal and ready for any fashion situation!

After spending all Friday in the hotel room by himself he promised to behave Saturday. This was good since I would be teaching for two hours and could not spend time running after him. (Thursday was embarrassing! In the bakery case!!!!)

We got to the shop early, had our coffee, and set up the class area with three spinning wheels a bit more than six feet apart. Today's class was for a friend who has spun on spindles but wanted to try wheel spinning. I took my wheel and borrowed two others. Harry looked good as he took a turn on my wheel while I was still getting materials set up. 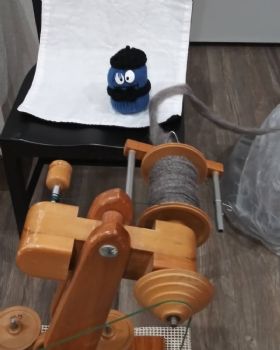 We just have a bit of a problem with his feet not being able to reach the treadles!

Then as I was oiling the two other wheels, he disappeared. One moment he was on the chair and the next ..... poof! It was a short hunt, even with most of the lights in the front of the store turned off. He was after the torte. 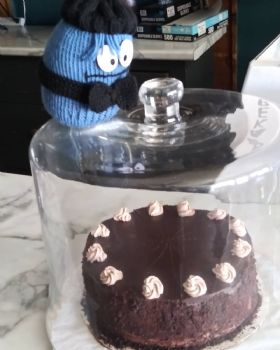 The glass was a mess from all his drooling. I barely got it and Harry cleaned up before time to open shop!

Greg arrived on time and we started playing with the wheels. It's always a great deal of fun for me to share what I know about fiber things when someone is asking questions. There are so many rabbit holes that are fun to go down that start from one innocent question. He brought one of his skeins of handspun to ply on a wheel. As he was working, Harry was mesmerized watching. 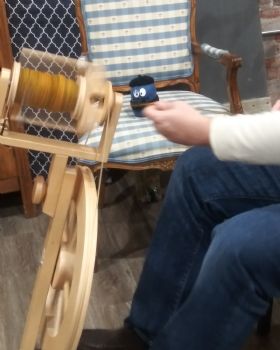 I think Harry was tired because he stayed in the chair until time to pack up and come home.

The class materials still need to be put away but my suitcase is unpacked. Tomorrow is soon enough.