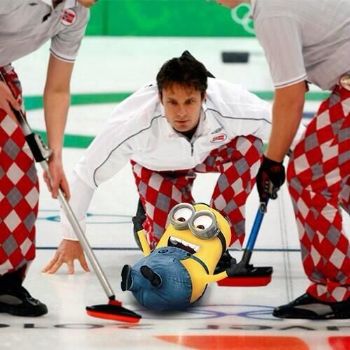 Curling is Cool Day
Curling is Cool Day celebrates a sport that is cool, both because it is hip, and because it is played on ice. Curling is one of the world's oldest team sports. Heavy granite stones, usually weighing 44 pounds, are slid down a rectangular sheet of ice towards a target. The targets are made of four concentric circles, and stones that stop closer to the center of a target are given higher scores. Curling brooms are used by "sweepers" to help guide the stones, by sweeping the ice in front of the stones, as they make their way down the ice. Teams are usually composed of four players each, and each team gets eight stones. The game was given the nickname "The Roaring Game" because of the rumbling sound the stones make as they slide across the ice. It has also been called "Chess on ice."

Curling began in Scotland in the 1500s, where it was played on ponds and lakes during winter. Some people still play it outside in similar settings. The earliest curling stones date to 1511, and the first written records of the sport date to 1540. In the 1600s, stones with handles were introduced. The Caledonian Curling Club was formed in 1838, and with it the first rules of the sport were adopted. The club was renamed the Royal Caledonian Curling Club in 1843; Queen Victoria had watched a demonstration of the sport and loved it, and subsequently acceded to the request for the name change. During this time the sport started becoming popular in cold climates where the Scots settled, such as Canada, the United States, Sweden, Switzerland, Norway, and New Zealand. In the following century, various changes came about with the sport: the stone was standardized, the slide delivery was developed, and the game was moved to indoor ice facilities.

In 1957, a meeting took place to try to form an international organization; an organization would be necessary in order to apply to get into the Olympics. A meeting was held once again in 1965, and six countries agreed to form the International Curling Federation. It was officially established in 1966, and the United States joined the following year. Its constitution set the rules for international curling competition. In 1990, its name was changed to the World Curling Federation.

Celebrate the day by curling. Find a place in your community where you can curl, or play the game how it was originally played, on ice outside. It is important to know the rules of the game before playing; learn the games' basic rules, or read the more in-depth World Curling Federation rules. You may also be able to watch curling on television today, as the day sometimes happens during the Winter Olympics

Did You Know ~
I heard they're going to make a huge revamp to the rules of Curling. Expect some sweeping changes.