Said 1CRAZYDOG about yesterday's blog (me counting the ways I love my Henry . . .):
"I think these fur babies just make us better people all 'round."

And yes, I think that's just so true. We have to try to be as good people as our dogs believe we are!

But . . . raising a puppy is not easy. Henry is our fifth puppy we've brought into our home during our marriage. After the death of beloved saint Charlie (also a golden retriever) we had, frankly, forgotten how much work it takes . . . and how much time and patience!

Henry at almost 20 months old is still very much in the process of becoming the good dog he wants to be.

So what does it take to raise a puppy? Empathy. Above all. The understanding that a puppy comes into our lives from a very different culture. We human aliens kidnap our puppies and take them to a very strange place, a place very different from the only culture that, at 8 weeks or so, they've ever known.

What kind of culture does a puppy come from?

1. A culture in which it's entirely OK and normal to bite -- everybody bites! And Henry most definitely was a very bitie puppie. For a long period of time. Chewing furniture: the wooden base of an old kitchen table was pretty much destroyed: subsequently replaced. And a bench in our mudroom: repaired and repainted. In fact, Henry STILL bites us, occasionally . . . maybe it would be fairer to say, mouths us, with much less than the full force of his massive jaws. But yes, he will let us know: things aren't evolving entirely as he would wish!! And he could get mouthier!! If the situation doesn't improve, right now!! And we have to let HIM know: uh, no.

2. A culture in which nobody's ever alone. Henry was always with his puppy litter mates -- four sisters -- and his incredibly patient mum, Bliss, right up until he joined us at eight weeks of age. And in our home, because we could not supervise him 24/7, he had to learn to be alone, sometimes. Which wasn't easy for him. Or for us. Especially because he was our first puppy who could not be crated -- having broken his leg in a tragic crate accident three days after he came home.

3. A culture in which nobody wears a leash -- and at first, Henry was not all that keen on his leash OR on going for walks. He tugged a lot! And as he grew stronger than us, we had to experiment with a prong collar on the recommendation of his obedience class teacher . . . until our vet (also a golden-owner) introduced us to the Easy Walk harness. WAY better . . . But Henry STILL quite regularly and for periods of time almost every day needs his leash, inside, to remind him: Mind your manners, Henry!!

4. A culture in which you can pee (and worse) anywhere! Gotta say, Henry was very very quick to be completely house trained . . . Dogs ARE den animals who really don't want to mess where they live. So this was something he'd learned within a few days, both at our home and at our office. All the "accidents" which happened after that were entirely our fault -- failing to observe when he was indicating it was time to take him outside: or failing to respond quickly enough. Puppy bladders are pretty small . . .

But: that's taken close to 20 months. It's taken a lot of empathy too: requiring ourselves, as a moral duty, to imagine just how strange and foreign our ways are, and how much accommodation we've demanded of Henry, to fit into our lives. We've had to put ourselves into his paws, so to speak . . . that moral duty to afford due weight and respect to the reality of another life, another perspective, another culture. And to make some reciprocal accommodations ourselves. When we're tired, when we're preoccupied, when we've had enough and just don't wanna . . .empathy is still essential.

Even now, as companionable as Henry truly has become, we know from past experience he will probably be well over two -- perhaps closer to three or four years of age, possibly never -- before he's entirely trustworthy.

So: a couple of take-aways?

First of all, for all those who acquired "pandemic" puppies which were perhaps the first puppies they'd ever raised: yeah, it's entirely normal to be frustrated and even angry at times, The bond between human and dog is deep but earned and it doesn't happen instantaneously, by osmosis.. And yes, some breeds of dog (and some dogs, whether pure bred or mixed breed, who've had ACEs . . . adverse childhood experiences) may never evolve into the perfect companions we yearn for. But a puppy must be a commitment for the lifetime of the dog. Barring unusual circumstances, to fail in that commitment is not only unfair to the dog -- it diminishes our own fundamental humanity.

And that's because, second, living with a dog CAN expand our very capacity for love AND for empathy. Each dog is a little bit different. Each dog requires and rewards the development of different components of our own empathy. But but but: those skills are transferrable to all of our interactions as human beings. When, by raising a puppy, we've formed a deep and empathetic relationship with a dog . . . patiently, kindly, flexibly . . . we may discover we've actually become more of the human being our dogs believe us to be. With greater capacity for empathy in all our relationships, including our relationships with other people.

Empathy. Could we all use more of that right now?

So maybe that's the deep conspiracy theory, the reason so many people were moved to take on a puppy during this pandemic. .

What we need now is what the world needs now too. More empathy. Sweet empathy!

Thanks, Henry. I'm not as good a person as you think I am . . . but you've sure helped make me a better person!! 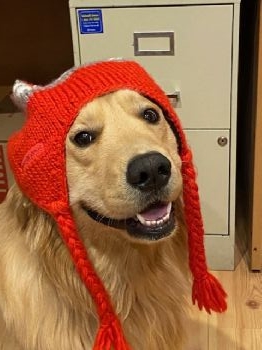