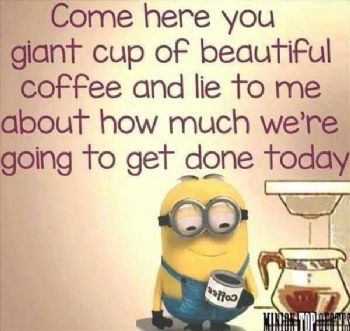 National Gourmet Coffee Day
There are numerous holidays dedicated to coffee throughout the year, but today we celebrate the crème de la crème of coffee: gourmet coffee. It can be enjoyed at home or at a coffee shop, and can even be used in food dishes. Coffee can be measured on a 100 point scale. By some accounts, a coffee must score at least 80 to be considered a gourmet coffee, while Coffee Review lists their top-rated coffees as having a score of at least 94.

Different beans and blends have different flavors. Seventy percent of the quality of a coffee bean comes from its genetic features, while about thirty percent is determined by how and where it is grown. Arabica beans are a premium type of coffee bean, while robusta beans have an inferior taste and are cheaper to grow. The best coffee—coffee that can be called gourmet—is made from one hundred percent arabica beans. Well over half of the world's coffee beans are arabica.

Arabica beans need to be grown at a higher elevation than robusta beans. They thrive at around 1,200 meters and grow best in an average temperature of about 70 degrees. Costa Rica is one example of a place where arabica coffee beans grow well, the volcanic soil aiding their growth. In general, arabica coffee is grown in the "coffee belt," an area between the latitudes of 25 degrees North and 30 degrees South.

In order for arabica beans to turn out well, they must be harvested and processed in a particular way. Coffee cherries should be harvested by hand so that only ripe ones are picked. The fruit is then removed by water process, leaving the beans, which are then sun-dried. They then need to be properly roasted and packaged.

Coffee beans originated in Ethiopia, and there are different legends as to how and when the drink was first brewed. One story claims that a sixth-century goatherd from Kaffa named Kaldi saw that his goats were more lively after eating coffee beans. A monk named Mullah apparently noticed this and brewed the beverage and spread word of it around the region. Another story from the fifteenth century claims that a ninth-century mufti—a Muslim legal expert—of Aden was the first to make the drink, and it became popular in Middle Eastern courts afterward.

Coffee was brought to Italy by 1615, and to France by 1644. It became a popular drink in the court of Louis XIV in 1669 after the Turkish ambassador introduced it to him. France later introduced a coffee seedling to the Caribbean island of Martinique, and the plant eventually spread throughout Central and South America. The Dutch introduced the coffee plant to Indonesia and Java.

The first coffee house opened in London in 1688, and around the same time in the American colonies, as the drink was introduced there in 1670 by the Dutch. During the Revolutionary War, the sale of coffee increased 600 percent due to the protestation of tea, but it did not stay popular after the war, as coffee itself was expensive. In the 1860s, the American Coffee Corporation was formed and began buying beans straight from Brazil and Columbia, which made coffee less expensive to Americans. Today beans from Brazil make up about a third of those used throughout the world, and Columbia is the world's second largest provider of coffee beans.

By 1878 coffee was being sold in sealed cans. There are many popular brands today, but one of them is Maxwell House. It was served at the Maxwell House hotel in Nashville, Tennessee, and was drank by Theodore Roosevelt in 1907. There is a debate as to if he coined their slogan, "Good to the last drop." Another innovation in coffee, the creation of decaf coffee, came about in 1903, but it didn't gain popularity until the 1930s. Now it makes up about a quarter of the coffee market.

There are many different types of roasts of coffee, and the rise in a preference for darker roasts in the United States was fueled by the proliferation of coffee shops around the country. This boom was started with the opening of Starbucks in Seattle in 1983. There seems to be an endless debate as to if coffee is good or bad for you, but there also seems to be a consensus that there are many health benefits, but some drawbacks.

Celebrate the day by drinking gourmet coffee! Drink some at a coffee shop or buy some quality beans to brew at home. You could even make some specialty coffee drinks or use gourmet coffee in a recipe.

Did You Know ~
I was reading a book about the origin of cappuccino, but it was all froth and no substance.
Share This Post With Others
Report Inappropriate Blog
Member Comments About This Blog Post