Keto Reboot and Walking with Fitbit

I joined a friend in a “work week hustle” to see who can put in the most steps for 5 days… Fitbit assumes everyone works Monday-Friday. I usually have Friday’s off and hardly move around. But today is Monday and it’s just after 9:30 in Arizona. I have less than 2,000 steps so far. A guy on the East coast already has over 6,000 steps. My best stepping during one of these 5-day hustles was over 70,000 steps back in September 2019. Actually it was 70,693 steps..which averages out to 14,138.6 steps a day (for 5 days). Now thats alot of steps especially seeing as I was in Death Valley at that time. I would like to see if I could beat my own record sometime. But like I mentioned before I can be quite lazy if I ain’t at work..in fact I am just laying across my bed as I am typing this. 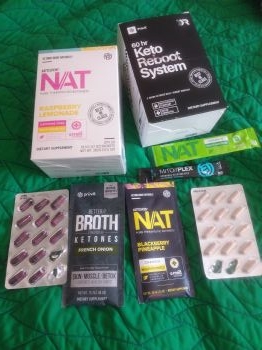 Now onto my newest thing: Keto Reboot…. A lady who visited my store told me about a product that she sells and about her group on Facebook. I decided to order some of the product from her and also join her Facebook group. The product she sells is expensive and later I found cheaper priced items on Amazon and ebay

Of course I had heard of keto before, but since joining her group it was the first time that I remembered hearing about the REBOOT. I figured what could 60 hours hurt…besides my wallet.

So I started last night after I got home from work. I just took the red capsules. The white/tan capsules are for mornings. After my usual cup of coffee this morning, I had a glass with the Raspberry Lemonade flavor powder mixed in. It tasted pretty good. The other flavor…Blackberry Pineapple will be going to work with me tonight. Was supposed to also have the little stick of “Mito//Plex” but hey I can only drink so much in the morning. So that will have to be saved for lunch. At lunch time I am also supposed to drink up the better//broth..its french onion flavor. I have drank chicken bouillon before and hopefully the keto broth will remind me of that. I have read mixed reviews on this stuff. So we shall see…I will tell you my opinion tomorrow.