I'm SEW excited for Thanksgiving week! DH has already smoked two turkeys for the family (they last so much longer that way, it kind of cures them, the smoke does) because it was supposed to be rainy here all week... tell that to the clear, bright blue sky we have outside today!! LOL! But it is the juiciest turkey he has made yet! Yum! That with the cranberry relish I found is delish! It's like cranberry sauce taken to the next level!

Here are a few of the masks that I made: 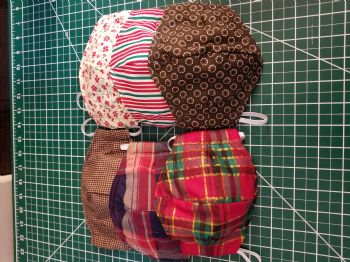 MIL loved the holiday ones I gave her and one of each of the ones in the pic are going to my BFF for her and her family. I have plenty for my family too. I like the holiday ones as well. Keeps things festive! May make a few more this weekend before my Christmas gift sewing starts back up.

Here is a pic of the table cloth I made, wish I had gotten a better picture... It does not hang too far off the sides, no cloth in anyone's lap. It looks almost like a nice burlap, but is 100% cotton: 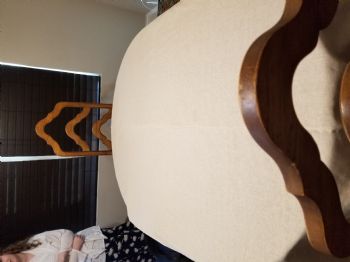 Sunday evening/night my friend D highlighted my hair for me. We were picking out the color, and I pointed to the one I liked, but she said it would look to brassy, and that was one thing I said I wanted to avoid. So we picked out a lighter blonde color, more subdued... It turned into this caramel-honey color on my hair... nothing like the box, but I think I love it! 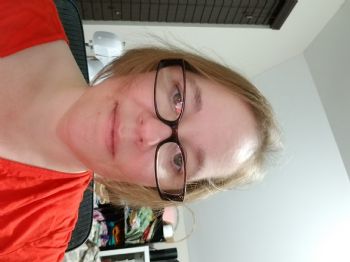 Pardon the reading glasses, I needed them to see the phone to take the picture!

Some of you know that I felt like we really needed the holiday cheer early this year and so I decorated early. Well, I had many helpers (Even DH, though he doesn't really like decorating at all, he still brought up the tree for me early and everything!), and here is one of taking a break: 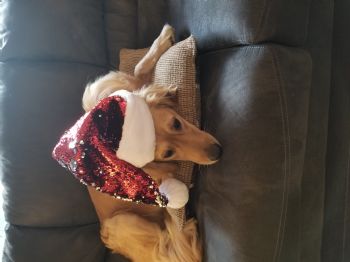 Next on my list of things to make, sewing-wise, are the rest of the bowl cozies, I've got four made, but I'm going to wait till I have them all made to take pictures. I made a fabric Scandinavian folded star (normally made out of paper, I can see how that would be so much easier!) It was so much fun! I used what I had on hand for glue, and tested out different fabrics, so it is a little wonky but I now know what will work and what won't, and I wasn't planning on keeping my first one anyway. I'm only going to make them for the people that I know will appreciate them, because while the folding part it fun, getting the fabric ready to fold is not. If you are interested in it I found it at the link below from Mister Domestic, no sewing involved unless you want to use a needle to put on a string to hang it from. And, he is so much fun to watch!

I also recently watched a video on how to make Christmas decorations from things from the Dollar Tree... I would not think you could make such lovely things from there, but she also uses chalk paint and vases from other places, but gotta hand it to her, she does a dandy fine job! I'm hooked and if I had more spaces to decorate I would totally be doing some of these things! Here is the link to that one if you are interested:

Someone in the comments was complaining that their store carried none of the stuff in her videos, and I was wondering about that, so when I went today to pick up some vases for some Amaryllis bulbs a friend gave me (she gave me one vase, and three bulbs, so I grabbed two more vases and a bunch of the marbles), I found a bunch of the craft stuff that was in the video, which was a bad idea, because I grabbed a few. I had not intended to do that, but I got the crafts to decorate our own ornaments for this year and four ornaments to decorate. By the way, I love the Amaryllis bulbs and can't wait to see them bloom! Hoping they actually do! Two have sprouted and all three have some roots!

So the baking and prep starts tomorrow. I have a whole list of errands to run, plus I'm hoping to bake a caramel cake. The caramel cake is for us, there will be enough desserts at the gathering that I don't need to bring ours as well. And Aunt G is in charge of desserts and I don't want to step on her toes (though I may bring one piece for Dad). I've been meaning to make this cake for like two months now, so I want to make it for our Thanksgiving. And I want to take some to my friend D. Then Wednesday is cooking prep and baking rolls and such. DH did smoke the turkeys, but is saying that he may go ahead and smoke the turkey breasts that we have on Wednesday and just take them so that everybody can keep that and the turkey we have will stay here for our leftovers. That is a lot of turkey (but that way everybody has turkey leftovers, one of the best parts of Thanksgiving other than family and pumpkin pie!). It is going to be a small gathering, there are not that many of us.

I hope you all have a great Thanksgiving week! I will probably only be one very little this week, as I am going to be super busy!

P. S. SP would not let me preview the pictures to make sure they were oriented right, so I apologize that they are all sideways!! LOL!
Share This Post With Others
Report Inappropriate Blog
Member Comments About This Blog Post