I’ve been baking a lot lately...I confess, it’s bread recipes off of Pinterest...I can’t really eat the sweet stuff a lot, so there you go lol...which means tracking these items can be rough.

A lot of recipes have serving size, as the item divided by a number, but if you don’t plug it into Spark recipes, you’re plugging the numbers provided on blog recipe (if provided) into the quick tracker portion of the nutrition tracker or searching for a member item that is similar and previously entered.

Honestly, I’ve done all of the above and guesstimated with the best of them.

This morning, as I was making my egg with accompanying English muffin bread slice, I took out my trusty scale and measured the slice...just to compare the recipe info provided and an actual Thomas’ English muffin serving size (57 grams, 130 calories). I was under on my slices’ weight by 15 grams...so I cut another, slightly bigger and came a little bit closer....and another and another LoL to see how close I could get to each slice. The recipe has the loaf divided by 16 and the calories as 155...I was working with less than half of the loaf, so it was too late to work that one out properly with a weight comparison...but still, I find it interesting...
www.restlesschip
otle.com/english-muffin-br
ead/

Instead of putting the recipe into Sparkrecipes, I’m opting to enter it as a regular old English muffin, it saves me time over all, and let’s face it...the tracker is a guide of guesstimates overall, it’s really the awareness of what’s going in and out that’s most important with tracking.

But what if I wasn’t in this mindset of checking? An English muffin is divided into two...my first instinct in cutting this loaf would be to cut two slices as a portion...and there you have it! What you think might not always be the case!

Truthfully, I gut check myself on many occasions to keep portion distortion at bay...whether it be a cup of rice, a cup of pasta, a slice of deli ham, a half chicken cutlet. When I feel my tracking game slipping, I reach for the measuring tools. Fun finds have been that I have repeatedly UNDER estimated items, such as deli meats, especially when I first started Spark. Cheeses are another one that is sneaky and hard to gauge, depending on the type and style of cut (sliced, grated or shredded).

I look at Sparkrecipes and member entered quick nutrition tracking with a wary eye, because not everyone is exacting in their entries and they are prone to human error. I’ve done some doozies myself! I SHM when I stumble across the ones that only have calories and maaaaybe one other element plugged into it to track (protein), like the other elements of fats & carbs don’t matter.

Taking the time to look and double check can make a big difference along the way!

A little research is the best defense in keeping the Portion Distortion Monster at bay. 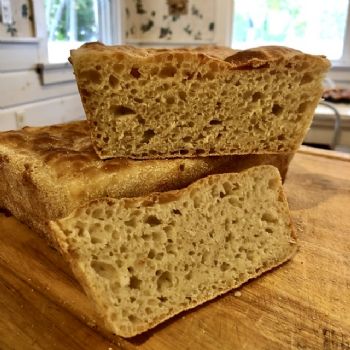