Aladdin snuck into theaters in 1992. Once upon a time, in the desert city of Agrabah, lived the Royal Vizier, Jafar. He wasn’t a very nice vizier, but he had a fairly nasty parrot, Iago. They wanted to rob the Cave of Wonders - specifically, a magic lantern. The lamp held a genie, that would give the owner of the lamp 3 wishes. The bad dude, Jafar, really wanted more than his legit job could give him ... greedy man. But, Jafar could not enter the Cave - he needed a “diamond in the rough” - Jafar identified Aladdin as the one to enter the Cave of Wonders for him. Aladdin was a Street kid. Princess Jasmine was upset that she had no choice but to marry a prince. She escaped the palace grounds, meets Aladdin & his monkey Abu. All was fun & games until Jafar caught them. Next morning, Jsfar says he had Al executed. Gasp! 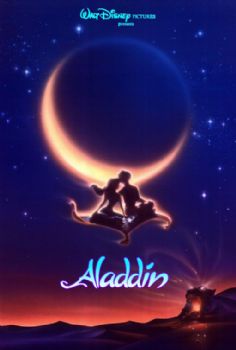 Jafar disguised himself as an elderly nice guy. He had Al go into the Cave - to get just the lamp, nothing more. Well, they found the lamp, Al took the flying carpet, & Abu grabbed a jewel. They manage to get out of the collapsing Cave, but Jabar takes the lamp & pushed our guys back inside. Clever little Abu snatched the lamp back, & the carpet came with Al. Al rubbed the lamp to clean it. Imagine his surprise when a big blue Genie came out. Three wishes! Al tricked the Genie into getting them out without losing a wish. OK, he promises the Genie he’ll make his third wish to release the Genie. So, first wish? Make him a prince. Poof! You’re a prince - Aladdin, as "Prince Ali Ababwa”. Not being a total,idiot, Jazz recognizes him as the street kid she met, but being a little bit idiot, she believes him when he says he was just getting away that night & really is a prince.. Meanwhile Jabar has a new plan - he’ll marry Jasmine & become the Sultan. 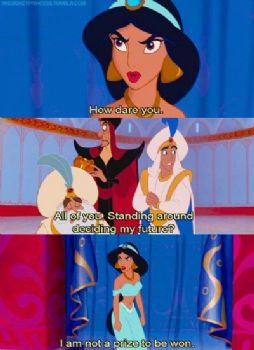 (How dare you?
All of you! Standing around deciding my future?
I am not a prize to be won.)

Yada, yada, yada, Jabar has Al thrown into the sea. Al escapes with his 2d wish. But, he doesn’t keep his promise & saves his 3d wish. Jafar realizes Prince Ali is Aladdin. J steals the lamp & is the new master of the Genie. He wishes to be the Sultan, & a great sorcerer. Al taunts Jafar, saying he’s not as good as the Genie. Jafar wishes to be the Genie, presto, chango, Jafar is the new Genie (his nasty little bird came, too). The old Genie starts traveling the world. The Sultan changes the rules so Al & Jazz can marry. Yay! 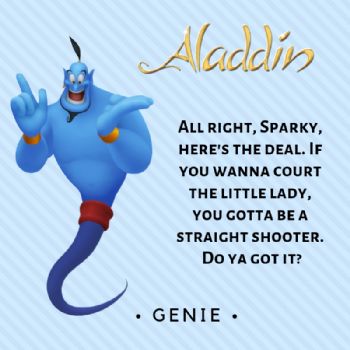 Friend Like Me, from this movie & the live action remake 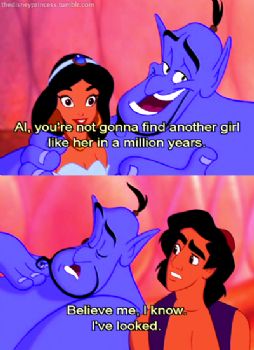 Well Ali Baba had them forty thieves
Scheherezade had a thousand tales
But master you in luck 'cause up your sleeves
You got a brand of magic never fails
You got some power in your corner now
Some heavy ammunition in your camp
You got some punch, pizzazz, yahoo and how
See all you gotta do is rub that lamp
And I'll say 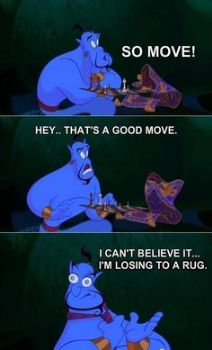 Mister Aladdin, sir
What will your pleasure be?
Let me take your order
Jot it down
You ain't never had a friend like me
Ha ha ha 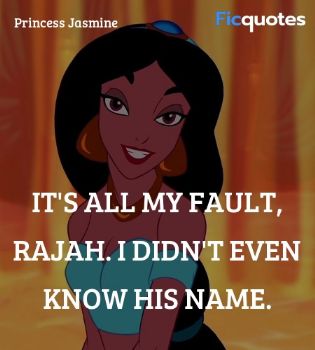 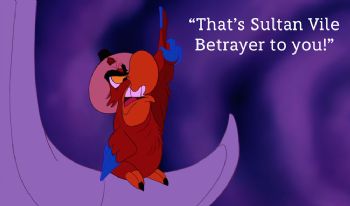 Yes sir, we pride ourselves on service
You're the boss
The king, the shah
Say what you wish.
It's yours! True dish
How about a little more Baklava 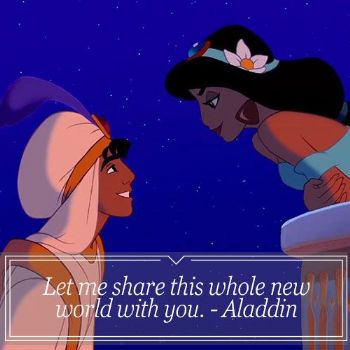 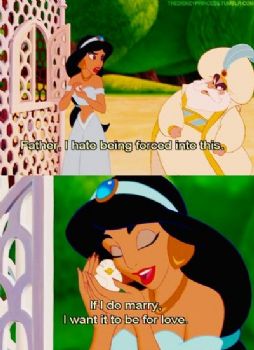