Not the planned day

WE planned to go hiking at a park in northeast Iowa. Second shot at it. The first time we wanted to hit the park it started raining, a lot, before we got there and showed no signs of stopping. Punted it.

Today the plan was to leave the house by 7:30am so we would be there by 9:30-10am and walk in the coolth. I was up, coffee made, paper read, cats fed and walked in to wake Dearly Beloved with 'Pikes Peak' and got a response of "no". So I mentally said 'ok. I wish you would not stay up all hours and then sleep all day. It's hard to have a shared life if you sleep all day.' Then I started on tasks of my own. He got up on his own about an hour later and I just kept working. Then he made the statement to the cats that he would leave the foot rest of his chair up so they could lounge when we left.

Discussion ensued. Upshot was we got going in about 10 minutes. By the time we reached the park it was filled with hikers and picnickers. So we decided "too many people, most not wearing masks" and we would just go further north and see what we could see. As we were driving he picked a place to eat (he had no breakfast) that was further on. 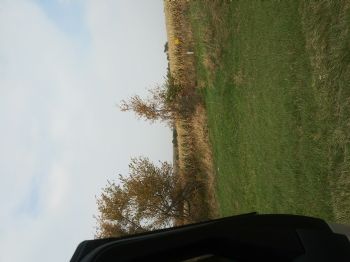 This is what you watch as the county sherriff fills out paperwork for an accident. I had signaled and stopped to make a left turn when BAM! Fortunately all three of us got out of cars after moving on to the side. I called it in telling the dispatch person no airbags went off, no car rolled, no gas leaking, cars were off to the side of the road, everyone seems good. While we were waiting for the sheriff to arrive we called insurance, personal information was exchanged, and I got an appointment to be checked over on Monday afternoon.

Our car has an appointment to be checked over on Monday morning. We could drive but we just want to make certain that replacing the back panel is the only thing wrong. 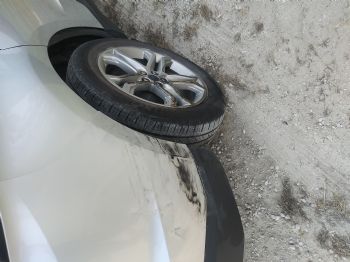 (I apologize if these are not right side up as I can no longer see the photos before they load.)

The other driver readily admitted it was her fault so we will be going through her insurance. I have a feeling that she was texting or on the phone and not paying attention to driving at the time.

But we are home. The cats are happy we are back. I am feeling like I will have bruises showing this weekend but we can deal.