The saying goes you should learn something new every day. The last two days have put that on steriods. Let me back up. We had a woodchuck move onto our property two years ago. It seemed content to stay clear of the garden, so live and let live....Well it turned into a she and this spring it began to eat everyting in sight. Flowering plants, seedlings freshly planted and newly sprouting vegetables in the gardens. We borrowed a Hav-a-hart trap from a fellow parishoner at Church and were able to trap and relocate it. However, her three offspring were of an age and size to be able to continue the devistation.....We trapped and relocated one, but the other two had no interest in the bait items and remained at large.

So the favorite burrow hole of this family was directly beneath a set of precast concrete stairs that lead from our living room to the back yard. They managed to pile up enough dirt under there that the back edges of the steps lifted from the support brackets and floated in mid air. In accumulating this, the concrete tiles the installers placed under the front edges were also dislodged and the stairs began to sink. 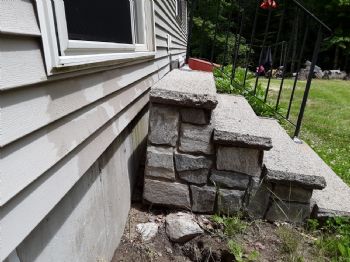 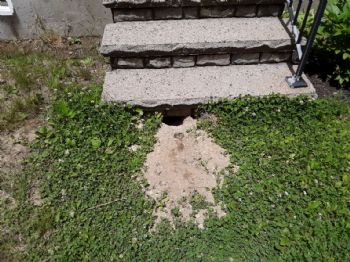 At some point the two siblings must have had a squabble over hole ownership as two soon became one. We had the installing company come and move the stairs so we could gass the remaining critter in its burrow. As soon as that happened, it must have high-tailed it for the hills as we have seen neither hide nor hair of it since.

DH and I spent a few days slowly removing all the build up dirt and creating a hole to create the space needed for the concrete pad. Wednesday a friend came by and helped us set forms for a concrete pad for the stairs. It took four of us about two hours to compact the earth, add a two inch layer of compacted gravel, build the forms and place the needed rebar. Yesterday the concrete was delivered. The mixer truck driver was very helpful and worked along side DH and #1 son to get the pour done. Now, all of this is new to us and without the help we got, we'd be still scratching our heads about how to do this. 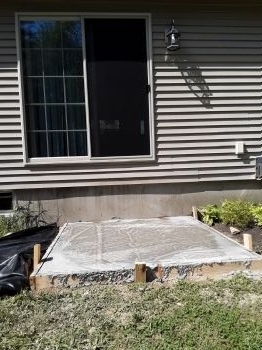 So once the concrete cures and the forms are gone, we'll have the stairs reinstalled and NO future animal problems (we sure hope)!!
Share This Post With Others
Report Inappropriate Blog
Member Comments About This Blog Post