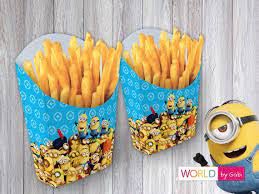 National Julienne Fries Day
Today we enjoy fries that are julienned. Julienne is a cutting technique used especially with vegetables, where they are cut into long, thin strips that resemble matchsticks. The dimension of the cut is about 1/8 inch x 1/8 inch x 1–2 inches. Another term for the cut is frenching, which is where the name "french fry" comes from. Although julienne fries are thinner than many french fries you will find today, fries at fast-food restaurants are commonly prepared this way. Another term for julienne fries is shoestring fries. An easy way to make them is with a mandoline with a julienne blade, and they can also be cut by hand.

French fries are a staple of fast-food restaurants and diners, often being paired with hamburgers and cheeseburgers. A simple food consisting of potatoes—and maybe some salt—they are one of the most popular side dishes in the world. By most accounts, french fries were created in Belgium in the late seventeenth century, in the valley of the Meuse River, between Dinant and Liège. It was here that small fried fish were often eaten. When the weather was especially harsh, the river froze to a thickness that made it difficult to catch fish. It was then that potatoes began being cut in long strips similar to fish and were fried in their place. This story is aided in that Spain controlled some of Belgium at the time, and it was Spain who had introduced potatoes to the continent. Some believe that french fries weren't created in Belgium until the eighteenth century.

Another theory posits that french fries were indeed created in France, but most believe this was after the Belgians had already invented them. Antoine-Augustin Parmentier was taken captive during the Seven Years' War (1756-1763) and had been given potatoes while in prison in Prussia. Although potatoes had long been used as hog feed in France and had been thought to cause disease, even being banned in 1748 because of a belief that they caused leprosy, Parmentier found them to be an enjoyable and healthy food.

After getting out of prison, Parmentier advocated for their culinary use. They were legalized in France in 1772, but Parmentier still faced resistance when he promoted them. He began hosting dinner parties with dignitaries such as Benjamin Franklin, King Louis XVI, and Queen Marie Antoinette and served them potatoes. Finally, after a famine in 1785, potatoes became more popular throughout France. Fries, or "frites," soon were being made. They were particularly popular in Paris, where they were sold by pushcart vendors. This was about a century after fries are thought to have been invented in Belgium, and it is unknown if France came up with the idea on its own, or got the idea from Belgium.

It is believed that it was from France that french fries made their way to the United States and the United Kingdom. In 1802, Thomas Jefferson had the White House chef, Frenchman Honoré Julien, make "potatoes served in the French manner." He described them as “potatoes deep-fried while raw, in small cuttings." This is an early instance of them being referred to as "French." According to the Encyclopedia of American Food and Drink, "French" does not refer to the country, but instead to a method of cutting called "frenching," where potatoes are cut into narrow strips. This is the same cut of fry that we celebrate today. In America, fries were usually called "french-fried potatoes" until the 1930s, when they started being called "french fries." It was through American fast-food restaurants that french fries were introduced to the non-European world. In France they are known as "pommes frites," in Spain they are "patatas fritas," and in the United Kingdom they are known as "chips."

There are many variations of french fries, such as curly, waffle, crinkle-cut, and steak fries—and of course, julienne! French fries can be made Cajun-style, be covered with chili and cheese, or be used to make poutine. Fries are usually fried in lard or vegetable oil, but they can be baked in the oven as well. Commercial fries usually come frozen, precut, and partially cooked. French fries are often eaten with condiments. Ketchup is preferred in America, while mayonnaise is popular in parts of Europe, and malt vinegar is commonly used in Britain. Today we enjoy the julienne variety of fries, cooking them however we'd like and pairing them with whatever condiments we want!

Celebrate the day by eating julienne fries! You could eat them at a restaurant or prepare them at home. If you make your own, you could cut them by hand or with a mandoline. There are many recipes online that you could be reference while making them.

Did You Know ~
One way or another, I'm really going to have to stop quoting Blondie lyrics...
Share This Post With Others
Report Inappropriate Blog
Member Comments About This Blog Post