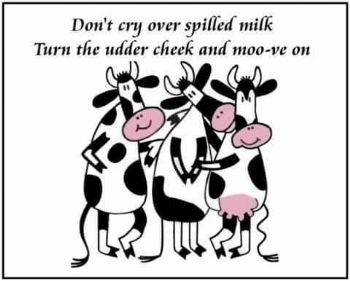 "Don't cry over spilled milk. Turn the udder cheek and moo-ve on." 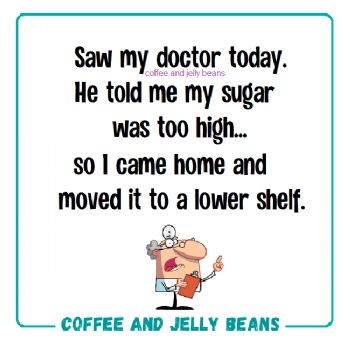 "Saw my doctor today. He told me my sugar was too high. So I came home and moved it to a lower shelf." 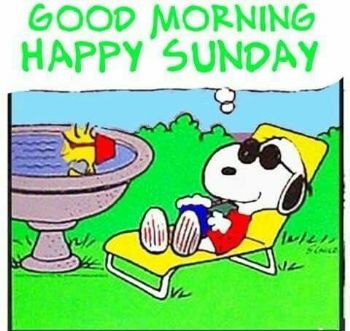 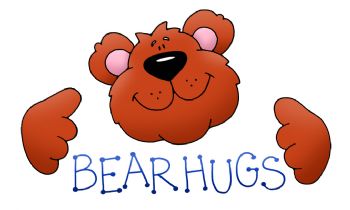 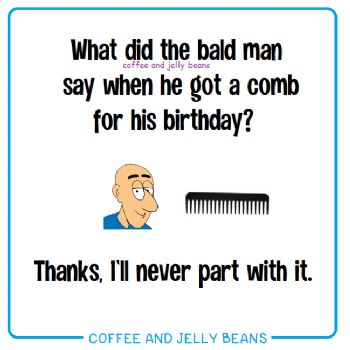 Once upon a time, there was a man who was peacefully driving down a windy road.
Suddenly, a bunny skipped across the road and the man couldn’t stop. He hit the bunny head on.
The man quickly jumped out of his car to check the scene.
There, lying lifeless in the middle of the road, was the Easter Bunny.
The man cried out, “Oh no! I have committed a terrible crime! I have run over the Easter Bunny!”
The man started sobbing quite hard and then he heard another car approaching. It was a woman in a red convertible.
The woman stopped and asked what the problem was.
The man explained, “I have done something horribly sad. I have run over the Easter Bunny. Now there will be no one to deliver eggs on Easter, and it’s all my fault.”
The woman ran back to her car.
A moment later, she came back carrying a spray bottle.
She ran over to the motionless bunny and sprayed it.
The bunny immediately sprang up, ran into the woods, stopped, and waved back at the man and woman.
Then it ran another 10 feet, stopped, and waved. It then ran another 10 feet, stopped, and waved again.
It did this over and over and over again until the man and the woman could no longer see the bunny.
Once out of sight, the man exclaimed, “What is that stuff in that bottle?”
The woman replied, “It’s harespray. It revitalizes hare and adds permanent wave.”


It's Book Lovers' Day! Today is a salute to bibliophilia and the love of the written word. The form of the written word has evolved over the centuries, from the clay tablets inscribed with Cuneiform and Sumerian in 3000 BC, through the papyrus made with the marrow of the papyrus reeds, and parchment in 300 BC. Paper came from China in the 3rd century and the printing press of 1440 expanded the ease of people having books. Today, we're seeing more of the digital versions even though the die-hards swear by the scent of a new book.
--International Day of the World's Indigenous People: today is an UN initiative to honor and protect the rights of indigenous cultures and populations around the world.
--National Hand Holding Day: today is a day for all forms of holding hands such as parent and child, boyfriend and girlfriend, and the hand of a friend during a time of need to give comfort; gatherings will hold hands to show solidarity; the gentle touch of hands can bring a sense of closeness.
--National Peacekeepers' Day: observed in Canada; today is a remembrance day for all peacekeeping activities, this day is marked on August 9 and observed on the closest Sunday; in 1974, 9 Canadian peacekeepers, serving on UNEF II, were killed when their plane was shot down over Syria.
--National Polka Day: the polka originated in Bohemia around the 1830's and debuted in ballrooms 1835; its popularity expanded then declined over the years but rebounded after WWII; the different localities have different types of instruments but most use the accordion.
--National Rice Pudding Day: I loved it when mom had left-over rice and would make a pudding out of it; the pudding recipe evolved from the pottage of the Middle East; different versions are according to local customs such as savory or sweet.
--National Veep Day: today commemorates when President Richard Nixon, after announcing his resignation the night before, resigned in 1974 and Vice-President Gerald Ford was sworn in; today celebrates the succession of power as described in Article II, Section 1, Clause 6 of the Constitution for the transfer from President to Vice-President.
--Spirit of '45 Day: observed on the 2nd Sunday; today is in commemoration of the August 14, 1945 announcement by President Truman that the war was over; today honors the legacy of the men and women of the WWII generation.
--In 1854, Thoreau's meditation on man and nature was published. From bing: "Two years of living on the shores of Massachusetts' Walden Pond have borne literary fruit as Henry David Thoreau's memoir of his secluded time there is published. 'Walden' will sell well, and remain a seminal work of early environmentalism and a celebration of the individual's spirit."