Drifting - but drifting in the right direction

I keep telling myself I need a little more focus - it's true that I'm definitely starting to drift a little bit.

I track on SparkPeople and I am also doing Intermittent Fasting (18:6 or thereabouts) and the weight is coming off steadily - which is wonderful. 1lb a week most weeks with the occasional STS.

At the beginning of lockdown the weight was just pouring on to me and I've halted that pattern and turned it around and that is a wonderful thing. Initially my motivation was 'I canNOT put any more weight on'. Other than that I don't have an over arching goal - other than my goal weight. But gradually my eating habits are changing with much more veggies and fresh food.

I have also turned plant based during lockdown and that is something I am extra delighted about.

When I first went in to lockdown I set myself these stringent daily to do lists - and I failed to complete them on a daily basis leading to much upset and even more lethargy. In the end I have found it has been much better for me to just do what I can - and what I can has gradually increased. I just need to keep following this pattern: things are getting better - slowly but it's real.

So today I made caramelised onion and red pepper hummus - I had to use the red pepper up as it was going off otherwise. I just used a basic recipe but with far less oil than they recommend (about two-thirds). I also had the vegetables to add in so that made the mixture wetter. I read that using tinned chickpeas isn't as good as cooking dried chickpeas from scratch so I'll try that next time. I need to create some more freezer space though because my freezer is chock-a-block.

I also made some brownies from Jessica in the Kitchen. I used monkfruit sweetener so the calorie count was slightly lower. Plus I had some prunes to use up so I cut the sugar/sweetener down and used prunes instead. Plus I added some chopped almonds. Next time I would ditch the sugar/sweetener all together and just use the tinned prunes and the juice they were in. Yum - it's just so good.

So I have been creative, plant based AND zero waste all in one day. Yayyyyyyy! 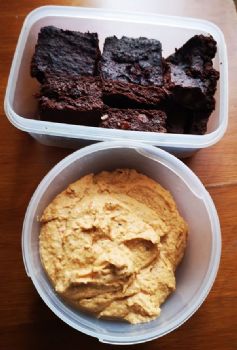