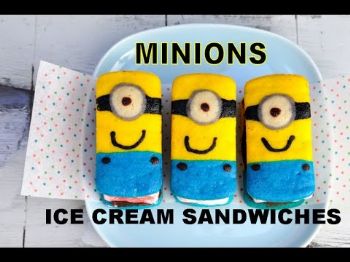 National Ice Cream Sandwich Day
Today we celebrate ice cream sandwiches in all their forms and flavors! They first appeared in the late 1890s in New York City, being sold by street vendors for a penny. They consisted of a thin quarter-inch layer of ice cream between two thin graham wafers. Shortly thereafter, by at least 1905, they were being sold on the beaches of Atlantic City for the same price.

There are many ice cream sandwich variations in the United States and around the world. The most common is made of a vanilla ice cream slab between two thin chocolate cookie layers that resemble a chocolate cake. The "It's It" ice cream sandwich originated in San Francisco in 1928 at the Playland-at-the-Beach amusement park, being invented by owner George Whitney. It consists of vanilla ice cream between two oatmeal cookies, which are covered with chocolate and frozen. They are still being sold today. Chipwich sandwiches made with chocolate chip cookies were popular in the 1980s, and after a handful of years of being out of production, they returned in 2018.

Ice cream sandwiches are also popular around the world. In Australia, the most popular ice cream sandwiches are called Giant Sandwiches. Another favorite in Australia are Maxibons, which are partially dipped in chocolate. In Singapore, popular flavors consist of honeydew, red bean, and yam. Rose and pistachio flavored ice cream between thin wafers is the norm of Iran, while in Vietnam, street vendors sell ice cream between layers of bread.

Celebrate the day by eating some ice cream sandwiches. Get some from a grocery store, ice cream truck, or ice cream shop. You could have the classic variety—vanilla ice cream surrounded by chocolate cookie wafers, or some from It's It or Chipwich. You could even make your own. All you really need are some wafers or cookies and some ice cream.

Did You Know ~
Having nutrition information on a bag of Cheetos is like having dating tips on a box of Crocs.
Share This Post With Others
Report Inappropriate Blog
Member Comments About This Blog Post