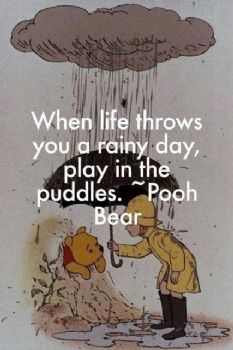 "When life throws you a rainy day, play in the puddles." Pooh Bear 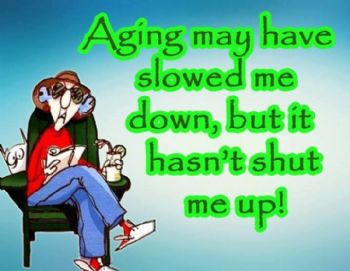 "Aging may have slowed me down, but it hasn't shut me up!" 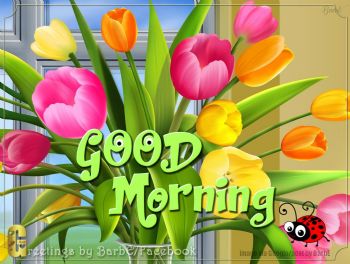 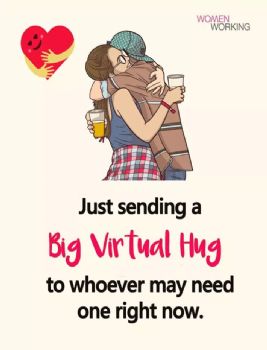 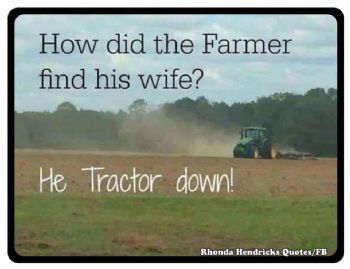 Once upon a time, a little boy called Sam was playing in the yard behind his house. During his pretend fighting game, he knocked over the outhouse. Now Sam was upset and worried that he would get into trouble so he ran into the woods and didn’t come out until after got dark. When he arrived back home, his pappy was waiting for him. He asked suspiciously, “Son, did you knock over the outhouse this afternoon?”

“Well, let me tell you a story,” said the father. “Once, not that long ago, George Washington received a shiny new axe from his father. Excited, he tried it out on a tree, swiftly cutting it down. But as he looked at the tree, with dismay he realized it was his mother’s favorite cherry tree,” his pappy paused.” just like you, he ran into the woods. When he returned, his pappy asked, ‘George, did you cut down the cherry tree?’ George answered with, ‘Father, I cannot tell a lie. I did indeed chop down the tree.’ Then his father said, ‘Well, since you were honest with me, you are spared from punishment. I hope you have learned your lesson, though.’ So,” the Sam’s father asked again,” did you knock down the outhouse?”

“Pappy, I cannot tell a lie any more.” said the little boy. “I did indeed knock down the outhouse.”

Then his pappy father spanked Sam boy red, white, and blue. The boy whimpered, “Pappy, I told you the truth! Why did you spank me?”

Pappy answered, “That’s because George Washington’s father wasn’t in the tree when he chopped it down!”

Today is Scout Scarf Day! All Scouts, boy and girl, active and former, are encouraged to wear their Scout Scarfs as a way of saying "Once a Scout, always a Scout". The Scout Scarf is a symbol of the Scout Promise.
--Homemade Pie Day: today encourages us to make our pies from scratch, not from mixes or pre-mades; originally pies were in ancient Rome but they used reeds to hold a meat or fruit filling instead of crust and the reeds were not eaten; the Greeks appear to have the early crusts of flour and water which could be eaten with the filling.
--Lammas Day: the name from loaf-mass, Lammas is the first harvest festival, usually wheat, and bread from the first wheat is taken to church for blessings; observed in the UK.
--Lughnasadh: a Gaelic festival of pagan origins to honor the first harvest.
--Mead Day: on the first Saturday of August, a salute and an awareness of this home brew made from fermented honey.
--National Disc Golf Day: held on the first Saturday of August; there are over 5500 disc golf courses in the world; the game is similar to golf but with a disc/frisbee instead of ball and clubs; game was formalized in the 1970's.
--National Girlfriends Day: a day to salute that special bond of female friends; whether they're old friends from when you were kids or just met friends, take time to get together today.
--National Jamaican Patty Day: on the first Saturday, a salute to a special turnover style pastry with a variety of meat fillings.
--National IPA Day: a salute to India Pale Ale, a craft beer from before the 1840's.
--National Minority Donor Awareness Day: today raises awareness of the critical need for organ transplant donors among minority communities.
--National Mustard Day: on the first Saturday, a salute to a favorite condiment of many variations; the mustard plant originated in the India area 5000 years ago and was brought to Britain by the Romans.
--National Raspberry Cream Pie Day: another salute to that sweet berry of summer; I haven't had a raspberry cream pie in ages.
--National Planner Day: today is for those who love to plan and organize and who would be lost without their planners, paper or digital; it feels like it was just yesterday we were carrying around those leather-bound calendars.
--Respect for Parents Day: today is a reminder that respect for parents is beyond just a one-day observance; teaching respect for the parents at home carries over to treating others with respect outside the home.
--Play Ball Day: today is to get outside and play any game that uses a ball; today honors the age-old tradition of the umpire calling out "Play ball!".
--Rounds Resounding Day: today is a movement to promote the gatherings for singing rounds; in the 18th, 19th century England, there were "catch clubs" where gents got together to sing rounds, catches, canons with a lot of drinking; a fun day to honor the singing of rounds; remember "Row, Row, Row Your Boat?
--National Mahjong Day: no info as to why today but there are several listings for competitions; if you've never tried mah jong, this could be a good day to find someone to teach you this fun game.
--Spider Man Day: today commemorates the debut of the Marvel character in "Amazing Fantasy", 1962; Spider Man was created by Stan Lee and Steve Dilko.
--Taxpayer Appreciation Day: no clear info as to the origin of this day; one brief listing mentioned that the individual taxpayer will pay a percentage 4-5 times higher than what corporations paid; not surprising.
--World Wide Web Day: a day to recognize the invention that has joined the world together, for better or for worse; conceived by Tim Berners in 1989 at CERN Center in Switzerland.
--World Lung Cancer Day: today raises awareness of how common lung cancer is and how preventable it is.
--Yorkshire Day: observed in England, today salutes the county of Yorkshire and contribution to the British society.
--International Childfree Day: today recognizes the contributions of those who choose not to have children and to contribute in their own way; I've had more than one teacher who didn't have kids but was a fantastic teacher.
--US Air Force Day: today was established in 1947 by President Truman "in recognition of the victorious Army Air Forces and all those who have developed and maintained our nation's air strength".
--In 1981, Music Television (MTV) debuted.