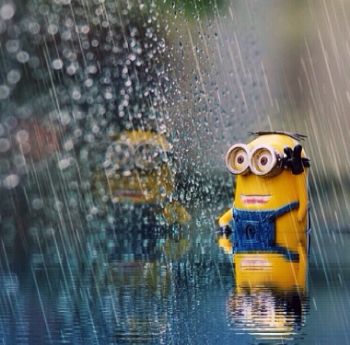 Rain Day
Who hopes for rain to pour down on the day of their event? The folks in Waynesburg, Pennsylvania, that's who! In the late nineteenth century, at JT Rogers & Co Drug store on Waynesburg's High Street, a farmer made a remark to pharmacist William Allison that it always rains on his birthday, which was July 29. In response, Allison began keeping track of the rainfall on the day each year. The farmer was Caleb Ely, who was born on July 29, 1829, in Washington County, Pennsylvania, not far from Waynesburg. After fighting in the Civil War, he got married and spent the rest of the days on his farm. But he went to Waynesburg often, and regularly stopped in Allison's drug store. He died in 1915 at the age of 85.

After William Allison passed away, his brother, Albert, continued to keep records of the rainfall on the day. During the 1920s, this job was taken over by Byron Daily. At some point during these years, Rain Day was born. In the 1930s, John O'Hara, a Waynesburg newsman, began sending stories about the day to other newspapers, which ensured the day would be more than just a local event. Early observances of the day consisted of a short ceremony on the courthouse steps and an annual hat bet between Byron Daily's son, John, and a regional or national celebrity.

The Waynesburg Special Events Commission was created in 1979 and was tasked with organizing a special celebration for each July 29. The first Miss Rain Day Pageant, hosted by the Waynesburg Area Chamber of Commerce, was also held this year, as was a street festival, which has continued as an annual event. Willard Scott, the nationally-known weatherman from NBC's Today Show, helped bring national recognition to the day beginning in 1985 when he participated in the hat bet and talked about the day on television. Currently, each year there is a street fair, entertainment on the courthouse steps, arts and crafts booths, hometown food booths, children's games, contests(such as an umbrella decorating contest), the naming of Miss Rain Day, and the hat bet.

The best way to observe Rain Day is to travel to Waynesburg, Pennsylvania, and attend the official Rain Day event. Take part in a contest, enjoy some live entertainment, watch the naming of Miss Rain Day, and see who this year's hat bet is with. If you can't make it to Waynesburg, you could look at the rain record from past years, learn more about Caleb Ely, or vow to keep track of how much it rains going forward on today's date or on a special date in your life such as your birthday.