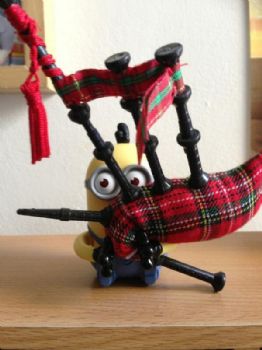 Bagpipe Appreciation Day
Today we celebrate the bagpipes! The instruments have long been associated with the Scottish Highlands, although they have come from many different places, and there are many variations of them. They have also been used in many different contexts.

The main components of the bagpipe are the bag, chanter, and drones. The bag is usually made of animal skin or rubberized cloth. It is inflated either by having air breathed into it through a blowpipe or by using a bellows. Air can then be fed throughout the instrument to make the sound, by placing arm pressure on the bag. The bag allows sound to be continuous while giving players the chance to take breaths, as well as for several tones to be played at the same time.

The chanter, or melody pipe, has finger holes that let a player make notes to form melodies. The other pipes, called drones, may have single or double reeds. They play single, constant notes that accompany the melody. They are tuned with the chanter by lengthening or shortening their extendable joints. The pipes are in wooden sockets, or stocks, which are tied into the bag.

Initially, folk instruments, bagpipes have remained as such, but also have been used in battle, at parades, funerals, weddings, and royal occasions. They were probably first used by pastoral sheep and goat herders, who played them to pass time while watching their flocks. They made them with easy-to-come-by materials such as skin, bones, and reeds. These instruments would quickly decay, so there is no physical evidence of them.

Bagpipes may have been used for centuries before any record of them was made. Most believe they were invented in the Middle East, and that the sheep and goat herders that used them were in Mesopotamia. There is some indication that they were used in ancient Egypt. A Hittite wall carving from around 1000 BCE shows a form of a bagpipe, and they are mentioned in the Bible in the book of Daniel. A bagpiper is also possibly depicted on an Alexandrian terracotta figure from around 100 BCE.

From the Middle East, bagpipes likely traveled to Greece, where they were known as "askaulos," meaning "wineskin pipe." They are mentioned in one of Aristophanes's plays from about the fourth century BCE and appear in other Latin and Greek references from around 100 CE. After the Romans invaded Greece, the bagpipe was adopted throughout the Empire just as other Greek culture was. They were mainly used by plebeians, but even Nero was known to play one. They were also used by the Roman infantry, while the Roman cavalry used the trumpet.

The British Isles became the most popular home for bagpipes. Invading Romans may have brought them there, or they may have later arrived by trade. They were mentioned in English author Chaucer's The Canterbury Tales in the 1380s. Some think they were imported to the British Isle of Scotland from the Romans, while others believe they came from England, Ireland, or developed in Scotland on their own.

Original Scotland pipes probably had one drone, with a second drone likely added in the mid to late sixteenth century, and a third drone likely added in the early eighteenth century. Scottish Highlands bagpipes had two tenor drones and one bass drone. It was there that bagpipes became more popular than anywhere else in Scotland or the world. In the Highlands, players were influenced by Celtic legends as well as by the wild nature of their surroundings. The players held an honored position in their clans. There are references to Scottish Highland bagpipe players by the fifteenth century, who played at weddings and festivals and even replaced organists at church. During the mid-sixteenth century, at a time when bagpipe music was descendent through most of Europe, it was ascendant in the Highlands. The MacCrimmon family did much to nurture its growth. A classical musical form that used the bagpipes sprang up there; it was called piobaireachd and predated the piano and its classical music by about a century.

Originally pastoral and festive, the military began using the bagpipe in the eighteenth century and accompanied it with drums. Battlefields were loud, so instruments were used to communicate. Bagpipers from clans—who were often at war with each other—would inspire soldiers before battle, and played during battles to signal movements, attacks, and retreats. When the Scottish uprising of 1745 failed, military training was banned. Thus, the bagpipe could no longer be used in this context anymore, although it was not banned for other uses.

In the Scottish Lowlands, pipers held important positions in communities. There were town pipers, and those who played dance music and songs at weddings, feasts, and fairs. The soft sounding Scottish Lowland bagpipe was played from about 1750 to 1850; it had a bellows, and three drones in one stock.

When England and Scotland united in the early eighteenth century, bagpipes were brought all over the world to British colonies, to places such as Africa and Ceylon. In many places, there already were indigenous bagpipe type instruments, which had been used for folk music and military purposes. Some examples are the tulum of Turkey, pilai of Finland, zampogna of Italy, mashak of India, mizwad of Tunisia, tsampouna of Greece, volynka of Russia, gaita of Macedonia, and the Bedouin habban.

There are many variations of the bagpipe popular today, such as the cornemuse of central France, the aforementioned zampogna of Italy, and the Irish union pipe. The most popular is probably Scotland's Great Highland bagpipe. Today we celebrate all types of bagpipes, and their importance to culture and in bringing us music!

Playing the bagpipe is probably the best way to celebrate the day. Perhaps you already have one and know how to play it, or maybe you still need to get one and learn. Listening to artists who feature a bagpipe is a great way to celebrate the day, as is listening to bagpipe versions of popular rock songs. You could also read a book on the history of bagpipes, or a book on Highland bagpipes. If you feel like seeing some bagpipes firsthand, you could visit the Musical Instrument Museum in Phoenix, Arizona, or plan a trip to the Morpeth Chantry Bagpipe Museum, or the International Bagpipe Museum.

Did You Know ~
"You can't sleep either?" Says a voice from under your bed.
Share This Post With Others
Report Inappropriate Blog
Member Comments About This Blog Post