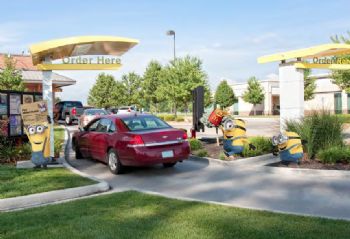 National Drive-Thru Day
National Drive-Thru Day was started by Jack in the Box restaurant to recognize all drive-thru businesses and to express appreciation for the availability of convenient meals that can be picked up with a vehicle. Drive-thrus are generally thought of as being for restaurants, but they also are used for banking, to purchase liquor, to gamble, and even to get married. Prior to the holiday's first observance in 2002, Jack in the Box asked California Governor Gray Davis for support. His response was to issue a commendation to recognize the day in the state. In past years, Jack in the Box has given out free milkshakes on the day.

Motorists were first served from their vehicles in 1921, when the first drive-in, the Pig Stand, opened outside of Dallas on the highway to Fort Worth. Diners ate on the premises in their vehicles, after carhops hopped on their running boards to take orders and clipped trays with food to their windows. Beginning in 1931, Pig Stand Number 21 in Los Angeles allowed orders to be made at a window, although it is unknown if diners had to get out of their vehicles to use it. Although the Pig Stand is known for being the first drive-in, they also have laid claim to having the first drive-thru window. As of 2020, there is just one Pig Stand still in operation: Pig Stand Number 29 in San Antonio, Texas. Following the opening of the first Pig Stand, more drive-in chains followed, like Maid-Rite and Carpenter's Sandwiches. Drive-ins were particularly popular in the late 1920s and early 1930s and were the precursor to the drive-thrus of the mid-twentieth century. In the 1930s, drive-thrus at banks, known as "motor banks," got their start. These drive-thrus offered bankers convenience and security and were another precursor to drive-thrus at restaurants.

Red's Giant Hamburg, which opened in 1947 in Springfield, Missouri, is considered by some to be the first drive-thru restaurant. It primarily was a drive-in, as staff—some of whom were on roller skates—brought food to vehicles on trays. But it also had a drive-thru window. The restaurant closed down in 1984, but a new version of it opened in 2019. In-N-Out Burger got its start in 1948 in Baldwin Park, California, on the outskirts of Los Angeles, and is also considered by some to be the first drive-in restaurant. Specializing in hamburgers, they offered takeout meals to motorists and had an intercom ordering system that allowed customers to place an order before getting to the window. There was no indoor seating and no outside parking.

Jack in the Box opened its first location in 1951, in San Diego, California, selling hamburgers for 18 cents. They had a two-way intercom in their parking lot where customers made orders and then drove to a service window to pay and pick up their food. Like In-N-Out Burger, Jack in the Box is viewed as being one of the first to use an intercom and to have a drive-thru window. They were "drive-thru only" when they opened, but now they are dine-in as well, although most of their business is still done via drive-thru. They now have locations in over 20 states.

Drive-thrus multiplied in the 1950s as the automotive industry expanded. They were popular across the country, but especially in California. During these Postwar years, automobiles became more affordable, and most families had at least one. There was a rise in car culture, which was fueled by increased mobility, a new highway system, and an upsurge in road trips. Not only were there more drive-thrus, but there were more drive-in and fast food restaurants, as well as drive-in theaters. The proliferation of drive-thrus was also influenced by the rising divorce rate, more single-parent households, more women in the workforce, and more after-school activities. There was less time for cooking and quick food was in demand.

McDonald's had opened up in the 1940s and had walk-up windows, but they didn't have a drive-thru until 1975. Wendy's added "pick-up windows" in 1970, the year after they opened. They claimed this helped them launch into a national chain. Taco Bell began adding drive-thrus in 1967, while Burger King started doing so in 1975. Drive-thrus shifted what was being sold at restaurants—there were more hamburgers, and less items such as fried chicken, which took longer to make. Cars adapted as well and started to be made with cup holders. Today's drive-thrus have windows, two-way intercoms, and large menus on boards. Some offer 24-hour service and two drive-up windows or lanes. They have made fast food restaurants even faster and have helped improve their sales. Today we recognize these restaurants and all other drive-thru businesses.

Here are a few ideas on how to spend the day:

* Go to a drive-thru at a Jack in the Box. Check to see if they are giving out free milkshakes.
* Stop at the last Pig Stand still in operation, located in San Antonio, Texas.
* See a replica of the first In-N-Out Burger.
* Visit the reopened Red's Giant Hamburg in Springfield, Missouri.
* Visit another drive-thru restaurant.
* Read more about drive-thrus in America on the National Museum of American History website.
* Stop at another type of drive-thru besides one at a restaurant, such as at a bank or liquor store.