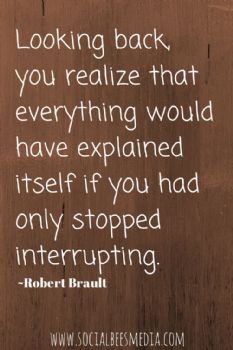 "Looking back, you realize that everything would have explained itself if you had only stopped interrupting." Robert Brault 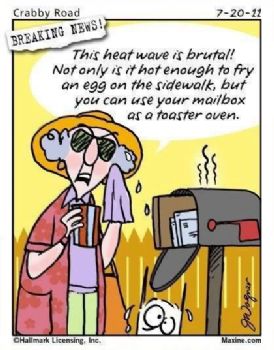 "This heat wave is brutal! Not only is it hot enough to fry an egg on the sidewalk, but you can use your mailbox as a toaster oven." 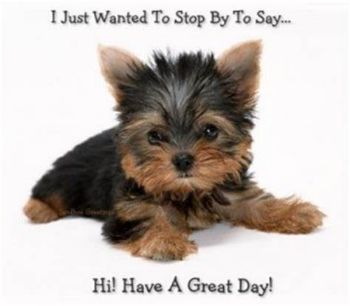 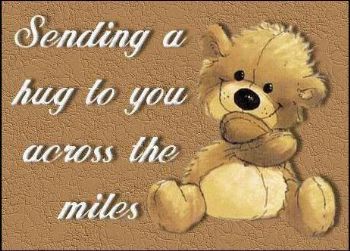 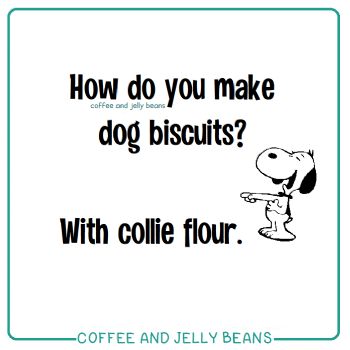 A man is in a convenience store and sees a dog walk in holding a Bag.
The dog approaches the counter, buries his face in the bag and pulls out a list and some money and, using his mouth, “hands” it to the clerk.
The clerk starts filling in the bag with groceries. And leaves the change on the counter. The dog stares at the money, and then at the clerk and starts growling “Grrrrr”.
The clerk says “fine fine” and adds in the $10 he was trying to shortchange the dog with.
The dog puts everything back in the bag and saunters off.
The man thinks this is very interesting and decides to follow the dog to see what else it will do.
He watches the dog reach a traffic light. Sit and wait for it to say “WALK” before it crosses.
He eventually follows it to a building. It jumps up and presses an apartment number with it its paw.The door buzzes open and the dog goes in. The man sneaks in behind it.
The dog goes to the elevator and pushes the up button with its snout. They both get into the elevator and the dog presses the button for the 8th floor.
Once there, the dog goes to an apartment door and starts scratching.
An older man opens the door and starts shouting at the dog, telling it how stupid it is.
The man who’s just witnessed how amazing this dog is decides to intervene.“Excuse me! But I think you’re being unfair to your dog. This is the most amazing dog I’ve ever seen. I saw it buy groceries for you, check the change it got was right, get all the way back up here and now you’re calling it stupid?”
The old man replies “Well, this is the 3rd time this week this dumbass forgets his keys!”


It's Invite an Alien to Live with You Day! To celebrate Robin Williams birthday (1951), we salute the TV show "Mork and Mindy", starring Pam Dawber and Robin Williams. Williams played the zany alien Mork from Ork. Na-nu, na-nu.
--Legal Drinking Age Day: no info as to why to; someone probably just wanted a drink for any reason.
--National Be Someone Day: today is a movement to pledge to be prepared to report child abuse and make a difference in a child's life; too many times, someone becomes aware of abuse but they don't know what to do and end up doing nothing; be mindful of the children and act when a child trusts you enough to share their awful secret.
--National Junk Food Day: this day has 2 paths of thought; one is the awareness of the harmful effects from the sugar, sodium and fat in junk foods and its contribution to obesity and heart disease; the other path is to throw caution to the wind and enjoy the junk food for today without guilt; we know which path Sparkers will take.
--National Lamington Day: observed in Australia; from daysoftheyear: At over a century old, this treat was named after the Governor of Queensland, Lord Lamington. The story goes that he was having his favorite yellow sponge cake served for his guests when the maid-servant accidentally dropped the cake into melted chocolate. When his Lordship heard he was the one who recommended them to roll the squares in coconut shavings to make them less messy for guests to eat with their tea.
--National No Pet Store Puppies Day: today is a day to remind us to adopt our puppies from the shelters and not the pet stores; there are so many horror stories about the conditions of pet store puppies including many die before they have a chance to be bought.
--National Tug-of-War Tournament Day: no explanation of why today but the sport appears in ancient times, originally part of religious rituals; now it’s a staple of the company picnic.
--Racial Harmony Day: observed in Singapore; from cute-calendar: The event is to commemorate the 1964 Race Riots, which took place on 21 July 1964. Racial Harmony Day also represents a day for schools to reflect on, and celebrate Singapore's success as a racially harmonious nation and society built on a rich diversity of culture and heritage. In schools all across the nation on that day, students are encouraged to be dressed in their traditional costumes such as the Cheongsam and the Baju Kurung. Traditional delicacies are also featured in the celebrations. Traditional games such as Kutih-kutih and zero point are played in schools, where inter-class competitions are sometimes organized This text has been taken from www.cute-calendar.com
--Take a Monkey to Lunch Day: today commemorates the Scopes Monkey Trial of 1925; John Thomas Scopes, a science teacher from Dayton, Tennessee, was convicted of teaching evolution in a public school which violated Tennessee law; that essential conflict between science and religion is still debated today; it took decades to get those antiquated laws off the books so the schools could teach science.
--In 1983, the lowest recorded temperature was -128.6 F (-89.2 C) at the Soviet Vostok Station in Antarctica and it still holds the record.