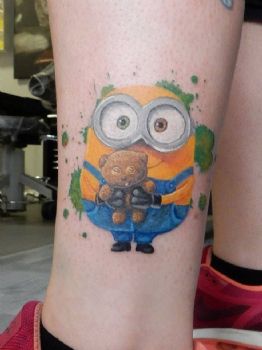 National Tattoo Day
Today is dedicated to tattoos, which are permanent marks made by adding pigment to ruptures in the skin. They are most commonly used for decoration but have served other purposes over time as well. Some have been used to show membership in groups, such as in gangs. Sadly, some people were given tattoos without any choice in the matter. In the nineteenth century, released US convicts and British army deserters were marked. Later, Siberian prisoners and those in Nazi concentration camps were given similar marks.

It is believed that marks on the world's oldest mummy, the Iceman, are tattoos. His remains date to 3300 BCE and his body has 60 lines and crosses on it. Similarly, Egyptian and Nubian mummies from 2200 BCE have been found to have tattoos. Classical authors mentioned the use of tattoos by groups such as the Greeks, Romans, and ancient Germans and Britons. After the rise of Christianity, tattooing was forbidden in Europe, but it remained in places such as the Middle East. Native Americans often tattooed their bodies and faces, and Europeans came across tattooing again when they came in contact with them and Polynesians. In 1769, explorer James Cook found tattooing on Tahiti. The natives called it "tatau," which is where the current name "tattoo" comes from.

During the eighteenth and nineteenth centuries, tattoos began to garner interest at exhibits, fairs, and circuses. Tattoo parlors begin popping up in port cities around the world and were used by European and American sailors. In 1891, Samuel O'Reilly patented the first electric tattooing tool in the United States. Tattoo pattern sheets from the United States became very influential around the world. Tattooing has declined in popularity in recent decades in many parts of the world, but there was a revival in Japan, Europe, and America beginning in the 1990s.

Celebrate the day by getting a tattoo! Find a good tattoo shop nearby, or visit one of the most iconic ones in the world. Those who aren't quite ready to commit to a tattoo could get a temporary tattoo instead. If you are a tattoo artist, the day is best utilized by doing the work you love! The day could also be spent by going to a tattoo museum, such as the Baltimore Tattoo Museum, or by reading a book about tattoos.

Did You Know ~
Adams girlfriend, Ruth, fell off the back of his motorcycle. He just rode on. Ruthless.
Share This Post With Others
Report Inappropriate Blog
Member Comments About This Blog Post