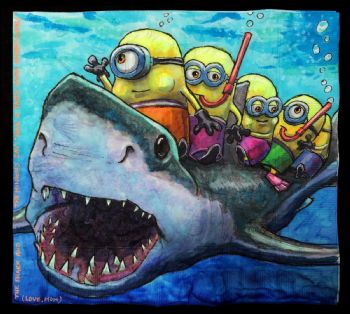 Shark Awareness Day
Negative stereotypes and perceptions abound about sharks, and Shark Awareness Day aims to reverse that. In particular, there is a belief that sharks will attack and kill humans. In reality, the chances of getting attacked by a shark are only about 1 in 11.5 million. In the United States, there are about 16 shark attacks a year, with just under 1 fatality each year. Worldwide, there are around 50 to 70 shark attacks a year, with 5 to 15 fatalities. It is much more likely that a person will be struck by lightning than be attacked by a shark.

Sharks are a keystone species, meaning many other species depend on them. Sharks are at the top of many food webs and play a positive role in their ecosystems, helping to regulate them, by keeping the populations of animals they prey on in check. They tend to eat sick, old, and injured animals, which helps do away with competition and disease in those prey populations, and keeps a balance in the food chain.

There are around 500 species of sharks. The smallest is the dwarf lanternshark, which is smaller than a human hand. Another small species is the deepwater dogfish shark, which is shorter than 8 inches. The largest is the whale shark, which may reach 40 to 60 feet. They are harmless to humans and animals, as they primarily feed on plankton. The fastest is the shortfin mako shark, which can swim at speeds around 20 mph.

Although sharks live in the ocean, some can live in fresh water for a long period of time. The bull shark and speartooth shark are both known to journey up rivers for many miles. Sharks are cartilaginous fish known as elasmobranchs, whose skeletons are made of cartilage instead of bone. This helps them with flexibility and speed, which increases their predatory skills. These skills are also enhanced by their ability to detect electrical fields, which is known as electroreception, as well as by their acute sense of smell. Their sense of smell also is useful in finding their way around and in finding a mate.

The following are some ideas on how to observe Shark Awareness Day:

* Raise awareness about sharks to your friends and family. Let them know the statistics about how rare it is for humans to get attacked by sharks, and about how important sharks are to their ecosystems.
* View sharks in the wild.
* View sharks in an aquarium. Many aquariums hold Shark Awareness Day events, so you could check to see if an aquarium near you is hosting one. There are many aquariums in the United States and around the world, and some are particularly known for being aquariums to view sharks.
* Visit the Living Sharks Museum.
* Stop at an attraction devoted to sharks in the United States.
* Read a book to learn more about sharks.
* Watch a documentary about sharks.
* Support a shark charity.

Did You Know ~
I don't understand why people get attacked by sharks. Can't they hear the music?