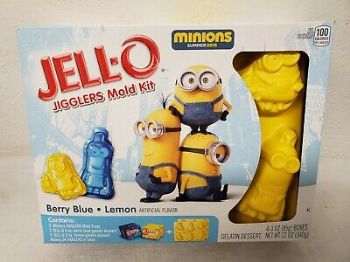 National Eat Your Jell-O Day22
Jell-O, sometimes stylized as JELL-O, is a trademark name for a gelatin dessert. It is the world's largest-selling prepared dessert and is often used as a generic name for any gelatin food. Eat Your Jell-O Day is celebrated on the birthday of the once-revered but now-disgraced comedian and actor Bill Cosby, who was a longtime spokesman for Jell-O. Today people eat Jell-O in its many forms!

Gelatin is a protein produced from collagen, which is extracted by boiling animal bones. The word comes from the Latin word "gelatus," which means "jellied, froze." It was first used by the Egyptians, but the French were first to cook with it. Early on, before it could be purchased partially or fully-made, it was a symbol of wealth because it took a long time to prepare. Gelatin desserts are now common at potlucks, picnics, and barbecues, where they are used in salads and molds with fruit, vegetables, and whipped cream. Jell-O is available in many colors and fruit flavors. It is sold ready-to-eat or as a powder that can be made at home. More than 450 million packages of Jell-O are sold each year.

Peter Cooper took out a patent for a gelatin dessert in 1845, where just water had to be added. However, he didn't market or commercialize his product, and there wasn't much interest in it. In the 1890s, Charles B. Knox packaged an instant powdered gelatin to be used to make aspic. In 1897, Pearl Bixby Wait of LeRoy, New York, created a flavored gelatin. He and his wife, May Davis Wait, had experimented by adding fruit syrups to gelatin, and May Davis came up with the name "Jell-O."

They did not have the knowledge or the funds to market it, so in 1899, they sold the rights to their neighbor, Orator Francis Woodward of the Genesee Pure Food Company, for $450. He wasn't successful with the product right away either. But, he began sending salesmen out in horse-drawn carriages to communities, fairs, and church socials to give out Jell-O samples. This helped with its popularity, as did its powdered-form packaging, and the proliferation of refrigeration. It was soon commonly being eaten at banquets and fancy dinners. Magazine ads and other mediums also helped to spread Jell-O recipes around the country.

That company was renamed the Jell-O Company in 1923, and Postum Cereal bought the rights to it in 1925. The company name was soon changed to the General Foods Corporation, and Jell-O is now made by Kraft Foods. In 1930, the still-popular lime flavor was introduced. Savory and vegetable flavors such as celery were introduced in the 1960s, but have since been discontinued. Jello-O was declining in popularity in the 1970s. Jell-O Jigglers, finger-food Jell-O in shapes, were reintroduced (old product, new name) and helped Jell-O regain its popularity. Jell-O shots, Jell-O mixed with vodka, rum, schnapps, or other spirits, were supposedly created in New Orleans in the 1980s. Although, in another story, Tom Lehrer claims to have invented them in the 1950s.

Celebrate the day by eating Jell-O! There are many recipes you could try, such as Jell-O Jigglers. Adults could treat themselves to some Jell-O Shots. For those interested in more history about Jell-O, a trip to the Jell-O Gallery could be planned.

Did You Know ~
I refused to believe my road worker father was stealing from his job, but when I got home, all the signs were there.