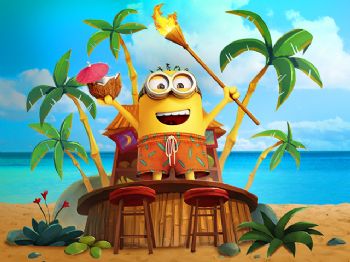 National Piña Colada Day
Today we celebrate and drink piña coladas, which are drinks made from light rum, coconut cream, and pineapple. The drink tends to be imbibed during warmer weather and is associated with boating culture and southern resorts. Piña colada means "strained pineapple" in Spanish.

There are two main stories as to where and when the drink got its start. The first, more convincing story, says it was invented at the Beachcomber Bar at the Caribe Hilton in San Juan, Puerto Rico, by bartender Ramón 'Monchito' Marrero Pérez, in 1954. Pérez had been introduced to Coco López cream of coconut and had been trying to find something to mix it with. On August 15, 1954, after experimenting with different liquors with it for three months, he mixed it with pineapple juice and light rum and blended it with crushed or shaved ice. The piña colada was born!

The drink gained popularity later that year when government officials drank it at a convention at the Caribe Hilton. According to the hotel, stars like Joan Crawford, John Wayne, Dean Martin, and Sammy Davis Jr. drank piña coladas there, being served by Pérez. Crawford apparently especially loved the piña colada, saying it was "better than slapping Bette Davis in the face." While the Beachcomber Bar is now gone, piña coladas can now be drank at the hotel's Atlantico Bar.

A second story says that the drink was invented in 1963 at the nearby La Barrachina bar, an establishment that is still in operation. Legend has that Pérez first worked there and invented the drink there, but then moved to the Caribe Hilton and worked there for 35 years. This story does not have as much credibility as the first story. No matter where and when the piña colada was invented, we enjoy it today on National Piña Colada Day!

Celebrate the day by drinking a piña colada or two! Making Pérez's original recipe may be the best version to try. The best places to have the drink are at the Atlantico Bar in the Caribe Hilton, or at the Barrachina. If that's not possible, maybe you can enjoy the drink while riding on a boat!

If you like Pina Coladas and getting caught in the rain...
Getting drunk in the shower would save a lot of time.