It's a Fowl Day 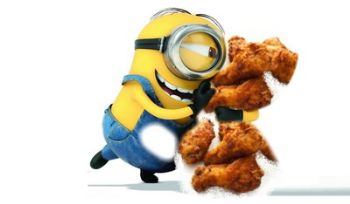 National Fried Chicken Day
Fried chicken, also known as Southern fried chicken, is eaten today. In order to make it, chicken is usually cut at the joints into smaller pieces, and the skin and bones are left on. It is coated in batter, which is made of ingredients such as eggs, milk, flour, and seasoning. It is then pan-fried, deep fried, or pressure fried in lard or oil. It ends up with a crisp or crunchy outside and a juicy inside.

The Scottish were the first Europeans to fry their chicken in fat, although they didn't use seasoning. Many ethnic groups in West Africa made seasoned fried chicken, that they battered and then cooked in palm oil. Today's fried chicken has its roots in the American South, where African Americans combined the frying techniques of the Scottish with the seasoning methods of West Africa.

Prior to the mid-twentieth century, chicken was quite expensive and fried chicken was only eaten on special occasions. Its price went down with the rise of industrial animal farming, and by the late 1990s and early 2000s, fried chicken was being mass-produced. There are now many fried chicken restaurants, and some of them have deals on National Fried Chicken Day. In the past, Grandy's, Church's Chicken, and KFC have participated.

Celebrate the day by making fried chicken! Enjoy it with corn, mashed potatoes, and biscuits—three common accompanying side dishes. If you don't feel like cooking, stop at one of the best places to eat fried chicken in the country, or at another restaurant near you. Some fried chicken restaurants have specials on the day, so make sure to keep an eye out for them!

Did You Know ~
The chicken farmer died under mysterious circumstances. The police suspect fowl play.
Share This Post With Others
Report Inappropriate Blog
Member Comments About This Blog Post