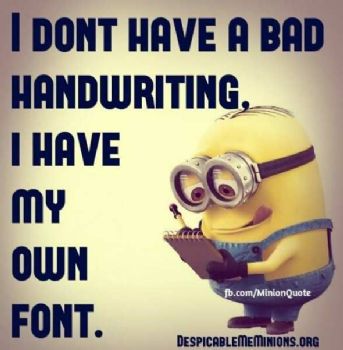 The below was typed in Comic Sans font. If Spark offers a way to change fonts, I can't find it. :-(

Comic Sans Day
What do you think about Comic Sans? Love it or hate it, this sans-serif font has caused quite a stir, so much so that two Dutch radio DJs, Coen Swijnenberg and Sander Lantinga, created Comic Sans Day in 2009. It is not very often that a font engenders strong enough feelings for it to have its own holiday, especially only fifteen years after it came into existence.

Comic Sans was designed by Vincent Connare in 1994 and released by Microsoft the same year. Connare originally intended for it to be used in a computer user guide called Microsoft Bob. He saw that Times New Roman was being used in the beta version of the program, in word balloons of cartoon characters, and thought that was too formal of a font for the circumstances. He created the font by adapting it from the font of two comics that were in his office at the time, The Dark Knight Returns and Watchmen. It wasn't finished in time to be used in Microsoft Bob, but it was included in Microsoft 3D Movie Maker, and then began being included in Windows 95. Today it is included on over 99% of Windows computers and over 90% of Mac computers.

It has since made its way from the computer screen to just about every place imaginable: from menus to invitations, and from billboards to business signs. Over the years it has become quite controversial, and many people have tried to do away with it. This has stemmed from the belief that certain fonts should be used for certain audiences and occasions. There is a wide consensus that Comic Sans should be used for children and in informal writing and signs. The critique of Comic Sans is that it has been overused to the point of being disrespectful, and has been used at the wrong times. Dave and Holly Combs, graphic designers from Indianapolis, created Ban Comic Sans in 1999, because of their belief that the tone of a text should be matched by its font, something that is often lacking with Comic Sans.

Everything you type should be in Comic Sans font today. According to Coen Swijnenberg and Sander Lantinga, you should "send all your mails, print all your reports and all your sticker address labels in this illustrious font." You could also be on the lookout for it all day, and count how many times you see the font being used. Although the font is often looked down upon, studies, such as one from Princeton University in 2010, show that those who study using more difficult fonts such as Comic Sans are more likely to retain information. Doesn't that make you want to celebrate Comic Sans more than just one day a year?

Did You Know ~
Don't mess with old people, life imprisonment is not that much of a deterrent anymore.
Share This Post With Others
Report Inappropriate Blog
Member Comments About This Blog Post