For Those in Need 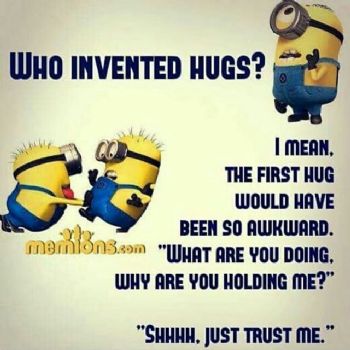 Hug Holiday Day
Hug Holiday Day is for giving hugs to those in need, especially to the elderly and sick, at places such as senior citizen centers and hospitals. The day was created by a nonprofit called the Hugs for Health Foundation. They said that hugs are part of a broader support plan for seniors, including friendship and volunteer support.

Hugging has been around for millennia and is practiced by almost all cultures as a way to connect with others without using language. Hugs have traditionally been given in may scenarios: as a greeting or goodbye, for sympathy or congratulations, and for gratitude, support, and affection. The word "hug" seems to have come from "hugga," an Old Norse word meaning "to comfort." "Hug" was first used around 1610, to describe a wrestling hold. It began being used for its current meaning in the 1650s.

Hugs may release a hormone called oxytocin into the bloodstream. This hormone, produced in the pituitary gland, helps lower blood pressure, heart rate, and the stress hormone cortisol. It also reduces anxiety, improves mood and memory, and increases bonding and closeness. Those who hug often tend to have increased empathy for others. In order for hugs to be beneficial, those participating must trust each other and both want to hug. Otherwise, the opposite effect happens, and cortisol levels rise, causing stress.

Celebrate the day by giving hugs at a nursing home or assisted living center. In order for hugs to have their many benefits, make sure the person you are hugging wants to be hugged. Let them know about the day and ask them if they would like to hug before embracing them.

Did You Know ~
When you are hugging a child, always be the last one to let go. You never know how long they need it.
Share This Post With Others
Report Inappropriate Blog
Member Comments About This Blog Post