Tuesday afternoon my husband started to complain about chest pains. We called 911. By the time he was assessed and checked, we all agreed he was okay to stay at home but when they were packing up their gear, he started to feel 'off' again. We all (the 2 medics and Ted and I) agreed that perhaps he should go to the hospital. Because of Covid, I stayed at home to wait. He had his cell phone and called me often to let me know what was happening. He was released just before midnight and I went to pick him up. He is scheduled to go for a stress test on July 6. In the meantime, he is taking it easy and doing okay.

Wednesday morning as I was getting up, a bit later than usual because of the late night on Tuesday, I heard an unusual noise. I have described it as a 'swoosh' and wondered where water might be pouring out. I looked outside and this is what I saw. 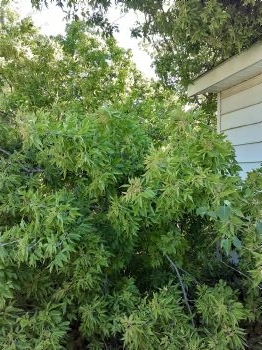 A neighbour told me she heard the noise too. Himself takes his hearing aids out to sleep and heard nothing. 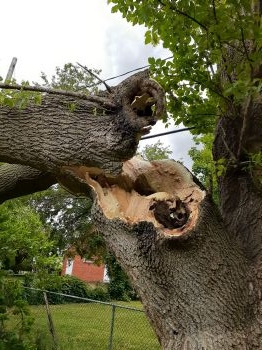 A very large branch broke off the tree in our back yard. It is a Manitoba Maple tree. Apparently these type of trees are short-lived. It is a weed tree that we did not plant. If we had known earlier, we would have pulled it out when it was just starting to grow. We would look at it and talk about getting it taken down but we knew that would be expensive. Mother Nature started the project on her own.

Fortunately, no one was hurt. The branch didn't fall on the fence between our property and our neighbour. A bit of the end of the branch hit the corner of the garage but it doesn't appear to have caused damage. Everything fell on my garden. That garden is mostly plants like hostas because the tree caused too much shade to grow vegetables.

Much of the rest of Wednesday was trying to figure out what our next step would be. We called insurance because of the garage getting hit.

Thursday a tree service came to remove the branch. 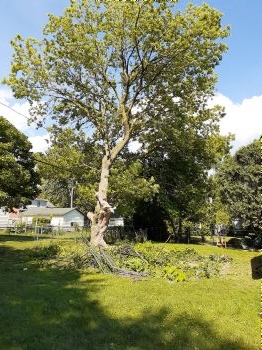 They were here for a couple hours chipping up the parts of the branch as it was cut down. We still want the tree to come down but that won't happen until July or August.

This morning, Friday, I was eating my breakfast outside. I was enjoying a bowl of cereal with fresh raspberries when I bit into something very hard. I knew from past experience that I was biting a filling from my tooth. I have called my dentist and now I am waiting to hear when she wants me to come in. Fortunately, I am not in pain but there is a sharp corner hitting my tongue.

That is enough for one week, don't you think? I remember listening to a radio series as a child, called 'Maggie Muggins' (yes, I am THAT old) and one of the last lines in each episode was, "...I wonder what will happen tomorrow."