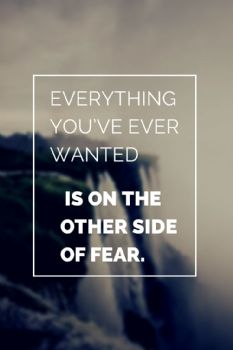 "Everything you've ever wanted is on the other side of fear." 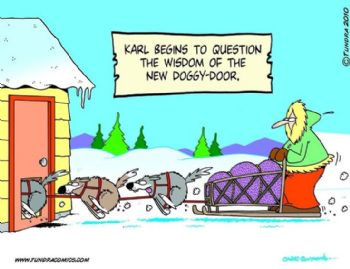 "Karl begins to question the wisdom of the new doggy-door." 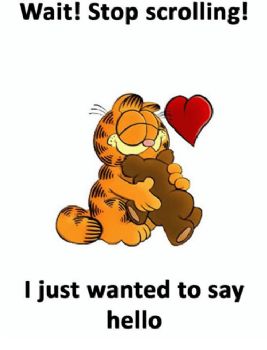 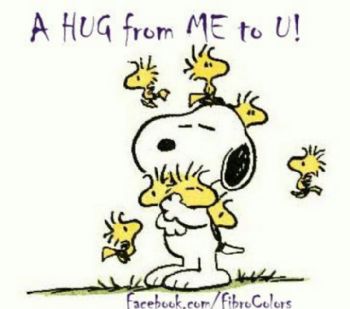 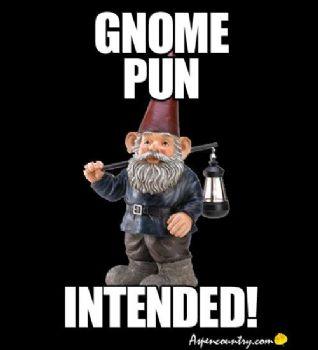 from TERRACOTTAGE
1.Law of Mechanical Repair
After your hands become coated with grease, your nose will begin to itch and you'll have to pee.

2.Law of Gravity
Any tool, nut, bolt, screw, when dropped, will roll to the least accessible place in the universe.

3.Law of Probability
The probability of being watched is directly proportional to the stupidity of your act.

4.Law of Random Numbers
If you dial a wrong number, you never get a busy signal; someone always answers.

5.Variation Law
If you change lines (or traffic lanes), the one you were in will always move faster than the one you are in now.

6.Law of the Bath
When the body is fully immersed in water, the telephone will ring.

7.Law of Close Encounters
The probability of meeting someone you know INCREASES dramatically when you are with someone you don't want to be seen with.

8.Law of the Result
When you try to prove to someone that a machine won't work, IT WILL!!!

9.Law of Bio-mechanics
The severity of the itch is inversely proportional to the reach.

10.Law of the Theater & Hockey Arena
At any event, the people whose seats are furthest from the aisle, always arrive last. They are the ones who will leave their seats several times to go for food, beer, or the toilet and who leave early before the end of the performance or the game is over. The folks in the aisle seats come early, never move once, have long gangly legs or big bellies and stay to the bitter end of the performance. The aisle people also are very surly folk.

11.The Coffee Law
As soon as you sit down to a cup of hot coffee, your boss will ask you to do something which will last until the coffee is cold.

12.Murphy's Law of Lockers
If there are only 2 people in a locker room, they will have adjacent lockers.

13.Law of Physical Surfaces-
The chances of an open-faced jelly sandwich landing face down on a floor are directly correlated to the newness and cost of the carpet or rug.

14.Law of Logical Argument
Anything is possible IF you don't know what you are talking about.

15.Law of Physical Appearance
If the clothes fit, they're ugly.

16.Law of Public Speaking
A CLOSED MOUTH GATHERS NO FEET!

17.Law of Commercial Marketing Strategy
As soon as you find a product that you really like, they will stop making it OR the store will stop selling it!

It's Celebration of the Senses Day! Today, really notice everything detail around you. At lunch, can you smell or taste the individual ingredients of your lunch? Feel the variations of the road beneath your feet when on a walk. Notice the intensity of color in the world around you.
--International Fairy Day: nearly every culture has some reference to a spirit or spritely creature who performs good or evil deeds depending upon their nature; mythological creatures of folklore, fairies are predominately from European Middle Ages; closely tied to Celtic culture, they are intelligent, magical and often mischievous; in "Peter Pan", Peter explained fairies came from babies' first laughs which would break into thousands of pieces that turned into fairies.
--Museum Comes to Life Day: today appears to be a whimsical exercise of imagination as you're to imagine what it would be like to be in a museum when the exhibits come alive (shades of "Night at the Museum"); would you want to be around the dinosaur bones or the battle scenes?
--National Parchment Day: observed on the last Wednesday of June; today is a salute to a cooking style that infuses flavor, locks in moisture, and preserves vital nutrients while bringing innovation and convenience to the kitchen; cooking with parchment has traditional French origins.
--National Pralines Day: pralines were originally created by coating almonds with caramelized sugar; pralines were named after French Marshal du Plessis-Praslin whose cook had created them; chefs in New Orleans substituted pecans for the almonds.
--National Upcycling Day: today raises awareness of sustainability and recycling instead of wastefulness; upcycling is the taking of old objects and adding your own creativity to make something new and unique.
--Stonewall National Monument Day: the Stonewall N.M. is in the West Village neighborhood of Greenwich Village in Lower Manhattan, New York and received the designation on June 24, 2016; the Stonewall Uprising was June 28, 1969 and was a milestone for LGBT civil rights.
--Swim a Lap Day: today is a day to do more than stick your toe in the pool; dive in and crank out a few laps; it's a great cardio exercise and is gentler on the joints than walking or running.
--World UFO Day: one of 2 celebration days to raise awareness about the existence of UFO's and to open minds to the possibilities; celebrates the anniversary of one of the first UFO sightings in the US reported by Kenneth Arnold in 1947 of seeing 9 high-speed crescent-shaped objects near Mount Rainier in Washington.
--In 2011, New York legalized same-sex marriage. From bing: "New York becomes the sixth state, and by far the largest population-wise, to legalize same-sex marriage. Thirty more states will follow until 2015, when the Supreme Court of the United States will make it legal nationally in the landmark civil rights case Obergefell v. Hodges."