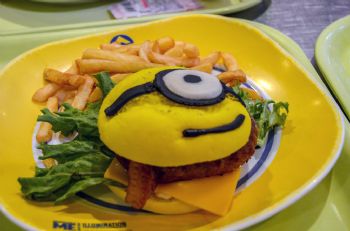 International Hamburger Day
International Hamburger Day celebrates hamburgers! Traditionally, a hamburger consists of a patty of ground beef that has been pan-fried, barbecued, or flame broiled, and it is served in a bun. Condiments such as ketchup, mustard, mayonnaise, and relish are often included, as well as toppings such as lettuce, tomato, onion, bacon, pickles, and cheese. Besides the hamburger made of ground beef, there are many variations of the burger, such as the turkey burger, veggie burger, and bison burger. Burgers are commonly served at fast food restaurants and diners, and even at high-end restaurants.

There are many people who claim to have invented the burger. Some sources say that Louis Lassen did it, at Louis' Lunch in New Haven, Connecticut, on July 28, 1900. No matter who came up with the hamburger, it was created sometime around the turn of the nineteenth century, and its popularity was boosted at the 1904 World's Fair in St. Louis. Some popular early restaurants that served a burger were White Castle starting in 1921, Kewpee Hamburgers starting in 1923, Big Boy beginning in 1936, and McDonald's beginning in 1940. Although the hamburger was created in the United States, its name is taken from the city of Hamburg, Germany.

Celebrate the day by eating a hamburger! Even if you are a vegetarian, veggie burgers are an option! You could go out to eat for a hamburger—make sure to check for deals taking place for International Hamburger Day. Chances are that you live in a state that has one of the 100 best burgers in America. You could also stop at Louis' Lunch for one, where Louis Lassen may have served the first burger. Since today is an international holiday, it would also be fitting to do some traveling and try one of the best burgers in the world. You could always make your own burgers as well. If you want to get creative, try a recipe you've never tried before.

The Vagabond Virus ~
Appropriate analogy: The curve is flattening; we can start lifting restrictions. = The parachute has slowed our descent; we can take it off now.
Share This Post With Others
Report Inappropriate Blog
Member Comments About This Blog Post