When he was 8 Himself's school had a reading contest: whoever read and submitted reports for the most books over the summer would win a nifty hardcover book called "Space Travel." Keep in mind this was 1957, so it's full of sentences like "Some day people will travel to the moon--" It's not very thick, written for primary school kids, and there are photographs on every page (in black-and-white, of course).

He had mild dyslexia and reading was always a struggle for him, but - he WANTED that book. He read a book every day or two that summer, writing the reports, and when school reconvened, he was miles ahead of the second-place reader. During a school assembly he was awarded his prize. Inside the front a label is pasted on the flyleaf, with his name neatly printed, saying the book was presented to him by his school.

It was one of the few mementos from his childhood that he kept, and I still have the book. I love what it says about him. But I actually told you that story to tell you this one:

Seven years ago, on our big Dixie Adventure, I navigated us to Huntsville, AL. He had no idea that the US Space & Rocket Center is there - he thought the only space museums are the national one in DC and the one at Cape Canaveral. Since I had planned our trip, I could keep this stop secret. I just knew the Space Center would be the icing on the cake.

Well, by golly. He was like a kid at ten Christmases. He tired me out. I took a snap of him as we went in - he was beaming from ear-to-ear. While he was in one of the simulators (you see what I mean about "overgrown kid") I went to the souvenir shop - with an agenda. As we were coming out, I said "Hey, I've got something for you," and gave him a hat, a tee-shirt, and a toy astronaut. Of course he had to try them - so I also have a snap of Himself as we were leaving the place.

We really did have so much fun! 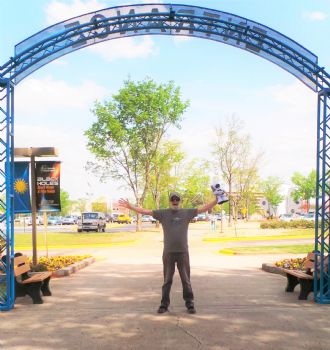