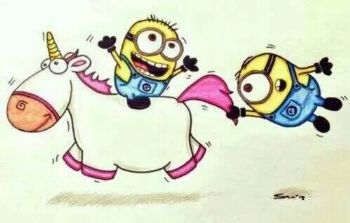 National Unicorn Day
Today we celebrate unicorns: mythological animals that look like horses with horns on their foreheads. Although the holiday is observed all around the world, it has special significance in Scotland, where the unicorn is the national animal. Unicorns may not be real, but the concept of them goes back millennia, and they have been an ever-present part of culture.

Early depictions of unicorns appeared in Mesopotamian artwork, as well as in ancient myths in China and India. The Greek historian Ctesias referenced an animal with one horn in 400 BCE. He likely was referring to the Indian Rhinoceros, but he described the creature as having a white body and purple head, with a multicolored horn on its forehead. He wrote that the animal was very fast and that those who drank from its horn were protected from some illnesses.

There have been other legends about the power of unicorn horns. One says poisoned waters, such as rivers, can be purified with a unicorn horn so that other animals can drink it. Because of this, "unicorn horns" became very pricey, costing more than gold. These horns were actually made from the protruding tooth of narwhals. "Powdered unicorn horns" were sold in some London pharmacies until the mid-eighteenth centuries.

Unicorns were mentioned in other places in the distant past. The Bible referenced an animal named a "re'em," which was sometimes translated to "unicorn." Today it is usually translated to "wild ox," the correct translation. The Christian Greek text Physiologus says that the only way a unicorn can be caught is with a virgin maiden. In that text, a unicorn jumps in the maiden's lap, and she suckles it and takes it to the king's palace. Because of this, the unicorn was compared to Christ. According to one other legend, Genghis Khan decided not to take over India because he came upon a unicorn that bowed down to him.

The unicorn was the symbol of purity, innocence, masculinity, and power in Celtic mythology. The day itself has its roots in Scotland, where the unicorn is the national animal. It is unknown how unicorns became associated with Scotland, but one theory says that it happened after narwhals were spotted there, far away from their usual home in the Arctic. During the reign of William I, in the twelfth century, unicorns began being used on the Scottish royal coat of arms. On it, two unicorns are depicted having chains around their necks. As unicorns were seen as being such powerful animals, the chains may symbolize that the Scottish kings were so strong that they even were able to tame unicorns. In the fifteenth century, during the reign of King James III, two coins—known as the unicorn and half-unicorn—had unicorns on them.