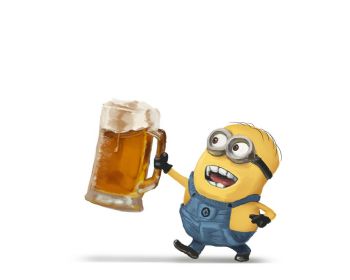 National Beer Day
National Beer Day is celebrated on the anniversary of the date that beer once again began being served, in 1933, after over thirteen years of Prohibition. Franklin Roosevelt signed the Cullen-Harrison Act on March 22, 1933, which said that beer with up to 3.2% alcohol content by weight could again be sold, as long as states passed their own laws allowing the selling of beer. After signing the law Roosevelt said, "I think this would be a good time for a beer," and the new law went into effect on April 7. People gathered outside of breweries and taverns the night before beer became legal, waiting for their opening at midnight. On the first National Beer Day, 1.5 million barrels of beer were consumed. Prohibition was not fully repealed until December, when the Eighteenth Amendment was done away with, and the Twenty-first Amendment went into effect. The modern-day celebration of National Beer Day started in 2009, after Justin Smith started a Facebook page for it. The day has since been recognized by elected officials.

Beer making can be traced to about 6,000 years ago in ancient Sumeria. At the time beer was cloudy because of lack of filtering, and it was drunk through a straw. By 2000 BCE, the Babylonians were brewing 20 types of beer. The Egyptians, Greeks, and Romans made beer, although wine became much more popular with the Romans. They considered beer to be the drink of the Barbarians; beer was only popular on the edges of the Empire. Germanic groups were brewing beer by 800 BCE.

Because of contamination, beer was a much safer drink than water during the Middle Ages; it was drunk by people of all ages from all classes. The Catholic Church even got involved with brewing beer, and abbeys were testing grounds for improvements in brewing. Beginning in the ninth century, in Germany, hops began being introduced, standards were set up for beer, and it began being mass-brewed. The 1516 Beer Purity Law—Reinheitsgebot—said a certain level of quality must be met for German beer. All beer could only be made with water, hops, malted barley, malted wheat, and yeast.

In the 1800s, Louis Pasteur discovered the role of yeast in the fermentation process, as well as pasteurization. Soon came along automatic bottling, commercial refrigeration, and railroads. All of these advancements allowed beer to be more easily produced and distributed. By 1880, there were 3,200 breweries in the United States. Prohibition closed them, but today there are almost as many breweries as there were in 1880, aided in part by the rise in the number of small craft breweries.

Celebrate the day by drinking beer! The best way to do it is to enter a bar right at midnight, just as it was done in 1933. In reality, to stay true to the spirit of the day, beer should only be drank if it is 3.2% alcohol or less. There are many brands of beer you could try, from many different breweries. Try a craft beer you've never had before, or do some homebrewing.

** ME: Due to physical distancing mandates, the bars in most states are probably closed.**