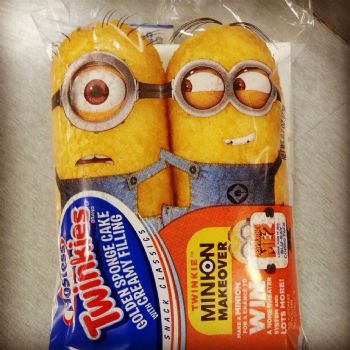 The Twinkie was invented in 1930 by James Dewar, who managed the Continental Baking Company in Chicago. He got inspiration for the treat after seeing a billboard in St. Louis for shoes called Twinkle Toes. Twinkies began being sold by Hostess and were originally filled by hand and made in shortbread pans. Their flavor was banana cream, but this was switched to vanilla cream during World War II, as bananas were largely not being imported at the time. Their mascot Twinkie the Kid has marketed many flavors over the years. There have been green Shrek and Ghostbusters Twinkies, the latter being lime flavored. Some other flavors over the years include blue raspberry, orange cream, and pumpkin spice. Early on they were recommended to be eaten with fruit or ice cream.

Twinkies have long been associated with junk food. In 1978, Dan White of San Francisco killed Mayor George Moscone and Harvey Milk. He used the "Twinkie defense," saying the eating of Twinkies and candy bars altered his mind, making him temporarily insane and causing the shooting.

Twinkies are also known for their long shelf life. The oldest Twinkie is thought to date to 1976. In that year, Roger Bennatti, a science teacher, left a Twinkie sitting on his chalkboard. He didn't move it for 30 years, and now it is in a glass case at the school, George Stevens Academy in Blue Hill, Maine. Bill Clinton put a Twinkie in the Millenium Time Capsule in 1999, which wasn't to be opened until 2100. Sadly, the Twinkie was removed because of fear that mice would eat it.

Hostess declared bankruptcy in 2012 and closed their bakeries. But, Hostess was purchased by Apollo Global Management in 2013, and Twinkies were quickly back on the market. They continue to be deep-fried at fairs, eaten plain, and used in many other recipes.

Celebrate the day by eating Twinkies! Pick up a box or attempt to make your own. Use them to make a cake or tiramisu. You could also deep fry them, or eat them in a Twinkie Weiner Sandwich.

**ME: Many eons ago, when I was a child, my mother used Twinkies to make strawberry shortcake. She told us in later years, that this was the only way we would eat all of the dessert, not just the strawberries and whipped cream. We knew what was good.**

Murphy's Law ~
The light at the end of the tunnel is the headlamp of an oncoming train.
Share This Post With Others
Report Inappropriate Blog
Member Comments About This Blog Post