sending out a virtual hug---
Well, this AM I heard that Prince Charles has --"the virus"---
That means that I shall not be visiting Buckingham Place , at least for now--

CBC T.V., was talking about Air Canada flights from Peru, and they interviewed a passenger who said she knew she had the virus, but hid it, so she could board the plane for Canada.
I was telling son#2 the Air Canada Pilot, and he said, "No Mom, that was my last flight from London, England."
" No, i'm pretty sure that this woman was on a flight from Peru," I told him.
Well, anyway, as it turned out , we were both right.
I guess people just will do anything to get back home.
So, he has been self quarantined for quite some time now, at home, as well as his wife and child--not flying--either of them!

Nobody should be flying right now---As son #2 says, "They are on every flight Mom."
The airline industry is suffering---It is sad to see the planes on the ground, lined up----

Now back to "the hair"---- finally my hairdresser has decided to close up shop for now---
Lord love a Duck! --- eventually the ponytail will be back in style--- 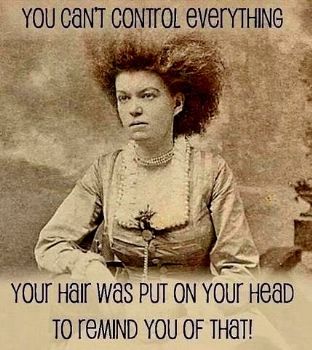