What The Weather Man Says

You may have seen/heard/read that we've been having some stormy weather here in the UK over the last few weeks.  Granted we enjoy a mostly temperate climate and I'm well aware that many Countries [including of course America] have to deal with more extreme weather conditions far more often.  However in recent years thanks no doubt to climate change, certain parts of the UK have had to deal with harsher weather than we're used to.

Storm Ciara a couple of weeks back thankfully didn't seen to cause much damage round here.  Storm Dennis occurred whilst I was back 'home' [20 miles outside London] and was pretty wild and windy.  It caused damage to Elaine's bathroom roof which is frustrating as only a few months ago she paid out four thousand pounds to have it fixed.  When I arrived back here though the only problem was due to an extension lead shorting in the middle bedroom which tripped some of the electrics - probably rain got on it.  That said, four miles uphill the river burst its banks and flooded a golf club.

My eldest son and son in law both work for a golf club.  Son is the Sales Manager, Son in law the General Manager plus Resident Golf Professional.  For quite some time, theirs was the only club in their area that hadn't got flooded which on the face of it was a good thing as they were getting more business than usual.  However, last week it finally did get flooded and suffered more due to all the extra footfall in the previous weeks.  Swings and roundabouts eh?  Or maybe I should say swings and downswings?

Meanwhile, back here in Wetland [otherwise known as Wales], storm Ellen arrived but didn't seem to have too much of an impact.  Until I woke to this in my bedroom this morning. 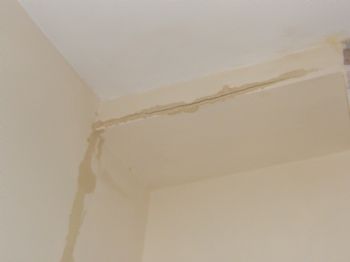 A tad frustrating as it was the one room that was basically finished.  All I needed to do was unpack some of the boxes that we'd put in there after bringing them back from Elaine's and The [ex?] Worker Friend[?]'s loft.  It never rains but it pours eh?  Especially here in Wetland.  Clearly the water gods [or demons] are still out to get me.  Which does bring into question the wisdom of my moving here to Wetland in the first place  On the upside, for the first time ever in my life, I had my eyebrows tinted yesterday.  I'd booked in to have my eyelashes tinted and my brows reshaped [both of which I used to have done regularly] and figured meh - why not get the brows done too, given I'd noticed they were looking a bit nondescript of late [which could be a good thing when they're overdue for reshaping -no?].  I'm really pleased with how they look and I'm sure the tint increased the drama as I raised them to roll my eyes this morning.  *tut*

*Just to clarify, - Louis Armstrong's version of Jeepers Creepers is actually The Best Ever but doesn't include the weatherman bit.