We've had a couple of nice sunny days, with temperatures rising above the seasonal norms, and this afternoon we're supposed to get a front through here to throw us back into Winter. How typical of February around here! Anyway, even when cold, sunshine is a cheering factor.

Yesterday afternoon I got the chance to show off my new room to the painter manager, so he could take photos for his own promotional stuff. He took pictures of the office, too, which his crew painted in late 2018. I pointed out the next collection of projects that I'll get around to "when the budget recovers". I'm saving the kitchen and bathrooms for last. Next up will be the parlor, the stairs and hall, and the Master bedroom.

I put ONE, count it ONE medal hanger back up in the "new" family room. And this morning I placed three representative medals on it. What if I just left it at that, rather than the vast chock-a-block of nine years worth of medals? I'm thinking yes! 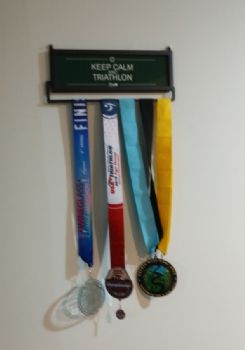 The Double Half Mary from 2013. This one is because it was the longest two-day distance I ever covered, and because for me, I decided, it will have to do as my "bucket list marathon", I would not do a full in one day. Two halves, back to back on Saturday/Sunday will have to do.

The Age Group National Olympic distance triathlon from 2015. This was my first time at Nationals, and what I celebrate with it is that I had the courage to go outside my comfort zone and even go do it!

The Wineglass Half Marathon one from September 2018. This was the one I kept my training secret from MOBYCARP, my brother, and surprised him by running the half to his full. The special nature of this last race together and our time off the course was capped by his running his own personal best Marathon time, less than a year before he passed. 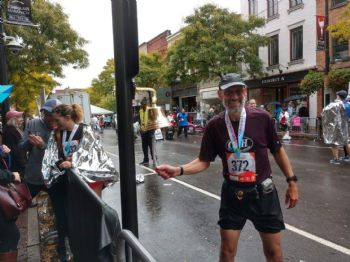 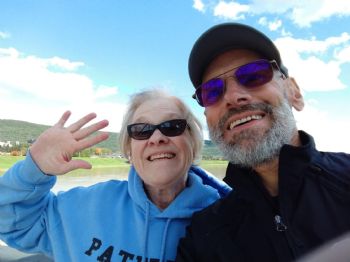 Across those three medals, that's enough to remind me: "I did it while I could".

And that's an important message, one well worth sharing: life's short. If you have goals you've been saying "someday" you'll get to, TODAY is "someday", the day to start planning and moving a step closer.

So let's get out there and live the best Wednesday, February 12, 2020 we can manage, right where we each are on the path. Because it is the only one we'll ever get. And we're worth it. Let's "do it while we can"!