I've never really liked the phrase "non-scale victory" but I'm not sure why. However, the last couple of weeks I've been noticing little things, not related to the scale that felt like victories.

First, I was straightening up our closet (which is actually a very small room that we put a clothes rack and dressers in and call a closet) and saw a stack of clothes I had put together intending to donate because they haven't fit for YEARS. Like, maybe the last time I'd worn any of them was 2014 or so. On a whim, I tried on a pair of jeans and they fit -- quite comfortably! They are size 14 Levis. So that was really nice.

I'd complained a couple of weeks ago about not making any progress in TRX, which is easily the most challenging class I take at the YMCA. But then, I thought, "I've been going to that class since about August -- I have to be stronger for it." And I started paying attention to how I feel during the class and what I can do.

When I first started, every TRX class brought me to the brink -- I'd have to stop and breathe at least once in every class, and I had to leave early once because I went to far and started shaking and was pretty sure I was going to throw up. That doesn't happen anymore. I don't know if it's because I have more endurance or a I learned to pace myself better or some combination, but I'd say not thinking I'm going to puke every class is progress!

I also realized that I can do the battle ropes for the full 50 second interval now, without having to change the motion I'm doing. I couldn't do that at first.

The first time we did pikes with our feet in the straps, I think I may have done one. The last time I think I did five. (You are in the plank position, with your feet about 8 inches or so off the floor, in straps that are attached to the ceiling. Then, you push your butt straight up into the air, forming an inverted V with your body. It's TOUGH)

I also noticed that there are lots of moves that I can do more slowly, and with my feet in different positions (you make the moves more challenging by changing where your feet are in relation to the anchor point on the ceiling).

So, yes, I HAVE made progress. It's just not super obvious.

Spin class is getting easier, too, even though I've only been going to it for a month or so. I had to take a break during the first spin class, but I think that was a matter of learning how to pace myself in that class. Yesterday, though, I noticed that my RPMs are just a little higher during the sprints than they were the first few weeks.

I've made a little bit of progress (though not as much as I had hoped at this point!) with running. I decided to start a 5K training program so that I ramped up mileage safely, and I'm on week 3. Last Friday, though I basically used the C25K app workout as a warmup, then ran for about 20 minutes straight -- and it felt great. I'm hopeful I'll be comfortable with the 5K distance by then end of March.

I'm not as sure that I'm progressing with BodyPump. I've missed a couple of workouts in the last month and I think that missing even one really slows my progression. Monday, I had 26 pounds on the bar during the squat track, and I think that's where I've been for awhile. I may try 30 on Monday. I also used 8 pound dumbbells during the chest track, but that was a mistake and I had to put them down a little over halfway through. Monday was a weird class -- I actually had that feeling of wooziness that I used to get in the very beginning.

Anyway, I'm trying to measure progress by what I can do more than what the scale says -- and being able to buy different clothes will be fun, too. I see some thrift store shopping in my near future :) As far as the reading on the scale goes, on Monday, I saw the number 183.6 -- which makes my official total 42 pounds lost. It's inched back up to 187 today, but that's my pattern -- a lower-than-expected number will appear, I feel great about it, then it eases back up to whatever my "normal" number had been, then slowly, so very very slowly, goes back to the low number and THAT becomes "normal" for a few weeks. It's weird, but I realized that's what's been happening for two years now.

Photo is Mila, my youngest daughter's dog, and BB, our boston terrier, napping on the sofa. BB seems to make a pretty good pillow! 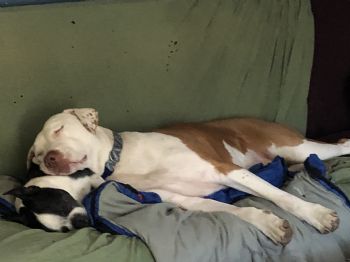