"The Song of Names"--movie review 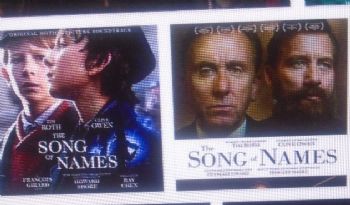 There have been many films about the Holocaust covering it from many different angles so a new film must be in the excellent category because 'good' isn't good enough and though "The Song Of Names" has some interesting sections it has too much working against it.

One of the interesting parts is the name of the film itself and if there really is a song of names and after some research, I have to do more research because I haven't found a definite answer yet!

The screenplay by Jeffrey Caine, based on a novel by Norman Lebrecht, goes back and forth from the 1930s to the 1980s with 3 different actors playing the 2 main characters Davidl Rapopart and Martin Simmonds when it could have easily been done chronologically.

The story is about a 12-year-old violin protege, Davidl who is brought from Poland to England by his father hoping to find a place for him to escape from the nazis. A music publisher, impressed by the boy's talent, agrees to take him in and after a minor skirmish with the publisher's son who is a couple of years younger, the 2 become fast friends. At the age of 21 Davidl is to give his musical debut completely subsidized by the publisher but never shows up and has disappeared. The film then follows Martin as he looks for his friend and tries to find out why he disappeared.

There are many awkward scenes and some that take your breath away such as the one where Martin and his wife walk through Treblinka, a Nazi death camp, where tall, standing stones memorialize the dead. Some in the audience may not be aware that Davidl having a bar mitzvah means he is now a man at 13. The musical moments shine while it is hard to really rate the performances due to the going back and forth through the decades.

"The Song Of Names" is a good movie but not quite good enough to attract enough of an audience.
Share This Post With Others
Report Inappropriate Blog
Member Comments About This Blog Post