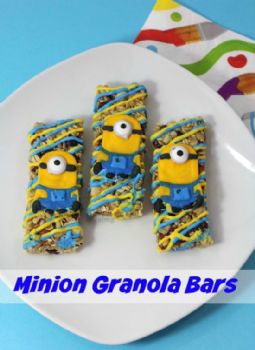 National Granola Bar Day
Granola bars can be a healthy snack, being that they may consist of oats, dried fruit, nuts, and seeds. Some granola bars are also fortified with vitamins and minerals. Granola itself may help prevent heart disease and cancer, and its insoluble and soluble fiber may help with digestion. Although granola bars are often marketed as healthy snack alternatives to candy bars, sometimes they are loaded with ingredients such as butter, marshmallows, and chocolate chips, and with binders such as brown rice syrup, honey, and maple syrup. These ingredients can add sugar, fat, and extra calories, and help to negate the health benefits of the granola bars.

Granola was invented by Dr. James Caleb Jackson, who called it "granula" at the time. Jackson had his own water therapy spa, Our Home on the Hillside, one of the biggest spas in the world, where 20,000 patients were treated. He thought diet was important to health, and was a vegetarian. He fed his patients a diet of fruits, vegetables, and unprocessed grains. He made granula from graham flour in 1863; it was similar to an early version of Grape-Nuts. It 1881, Dr. John Harvey Kellogg took the name and recipe and substituted oats for the graham flour clusters. Kellogg was sued by Jackson, so he changed the name of his recipe from granula to granola. It quickly became a successful part of Kellogg cereals, and C.W. Post started producing it as well. It was soon eclipsed by other cereals though, and became largely forgotten.

Granola's popularity comes back during the hippie and health food movement of the 1960s. The food and name was brought back, and fruit and nuts were added. The first commercial granola of the modern era was produced in 1972.

Most sources claim Stanley Mason was the inventor of the granola bar. He also was known for inventing the squeezable ketchup bottle, as well as dental floss dispensers. Herrick Kimball also claims to have invented the granola bar. Another source claims it was invented by Edward Thayer Sr. of Chico, California, whose obit reads, "Many will remember Ed as the original patent holder for the first granola bars sold in the US." Regardless of who invented granola bars, they are now wildly popular, sometimes taking up whole grocery store aisles, and fueling everyone from athletes to hikers, to people just wanting a quick snack.

Celebrate the day by eating granola bars! Buy a few different kinds at a grocery store, or make your own.

Did You Know ~
I don't approve of political jokes...I've seen too many of them get elected.