A French lesson with a difference...

This morning, Laurie decided that he did not want to share his cold with anyone else, so he stayed in bed and I went to the French class on my own.

The Tuesday morning class is presented by three tutors on a three week rota, Mireille, Lucia and Daniel. Mireille is a Parisian lady who speaks very fast and produces random articles for us to read aloud and translate; one week it was stem cell research, another was the pyramids, last week was about a French family company producing grain for four generations. Lucia discusses a variety of topics and is often quite hard to understand. Daniel is originally from the Alsace and easy to understand, he is also very good at finding relevant and interesting subject matter to discuss and explains things well.

Today was Daniel’s turn.... we all greeted him for the New Year and then he began...
‘Do you all know about the celebration of the Epiphany?’ We all did and we also knew the French tradition of the Galette du Roi, a frangipane pie, which has a small porcelain figure baked in it; the person who finds the figure becomes ‘king’ for the day. Daniel handed out slices of the pie and a king was duly chosen. We were also toasted with Breton cider, a surprise at 10 am, but Daniel exclaimed that it was only 4.4% so not really alcoholic lol. 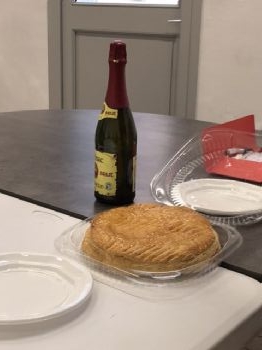 The pie was cut into 8. We all had a slice ( 6 of us), then the remaining slices were halved again, but even I resisted another piece, too much sweetness at that time of the morning and I really don’t have a sweet tooth! 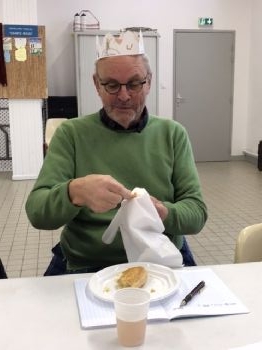 The ‘king’, wiping his trophy; you have to eat the galette du roi carefully, so that you don’t risk breaking a tooth . The galette even had a crown with it. Lovely tradition and a bit of fun on a cold Tuesday morning.

After the lesson, it was back home to check on the ‘patient’ who was up by then and ready for brunch... the rest of the day was pretty normal, visiting the apartment, shopping for some fish for dinner, walking Zaba. 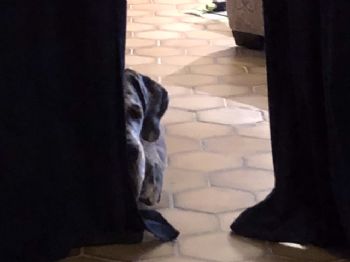 This was my pic of Zaba for today, him peeking at us eating our dinner, pretending not to care. Every time one of us moved our chair a little, he got ready to approach for after dinner tidbits, we kept him going like that for about five minutes and then he finally came over to see if anything was on offer....
Share This Post With Others
Report Inappropriate Blog
Member Comments About This Blog Post