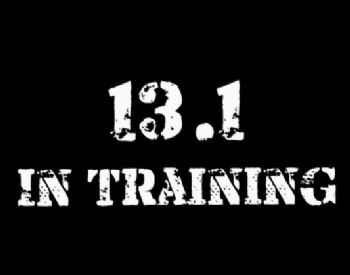 Yes, you read that right. Jim & I have thought for awhile that it would be great to get to meet Jeff Galloway & felt that it would also be great to train for his JG 13.1. Well, reality of getting people to care for our horses is that it would be either too difficult or too expensive to make that trip & honestly if we went through that much trouble & $$$$ to take a trip, it would not be that trip.

We also had tried trail running one time in 2018 and really did like it, there was one other run we had that had portions of trail running to it- and those were the most enjoyable runs we had, even though they were hard, it was a bit like being a little kids running through the forest again, verses pounding pavement.

So we are, like I mentioned before, signed up for a trail run series. New Years Day we found a neat trail we had never been on and will likely use that one as a training ground because it has rolling hills. It is also the site of one of the runs in the series.

So twice this week we headed out and started the plan adapted from Jeff Galloway & what I love about his plans as they start out gradually and build up in a logical order. Everything about Jeff's plan it to keep you safe & injury free, and I might add, feeling really good not only after the run, though the next day too.

Last night we headed out at 6pm, it was dark here, and we drove out to the loop we like to train on- we walked a mile, then did intervals of 15:30 for 10 minutes, just under a mile. We also did the same on the 1st, only in daylight. So this weekend will be another training session with what is on the training log, called the 'long run'. At the beginning the long run looks like a laughable thing to call it, though that is the day in the training log where the longest run of the week happens. And at the beginning with baby steps that long run is a mile. We surround each workout by a mile of walking warm up, a mile of walking cool down.

Two of our sons joined us for this last night and we were pleasantly surprised by how much they like it. Our youngest did four 5k runs with us in 2018, so he knew what to expect, though it had been a year since we had conditioned together. Last night in the dark, lighted only by a bright moon shaded behind heavy clouds, I hear him exhale a happy, deep exhale & say, "Oh, mom, thank you, I love this. I was born to do this." He is 11, will be 12 in a week. We have an older young man, who used to be our foster son, though still is with us due to his disability, ran with us too. Sometimes it would be something he would complain about, though he was cheerful and euphoric after the run. I think they have been bitten with the run bug.

Though it is winter here, and unseasonable warm, I don't know how long we will be blessed with this weather, I will enjoy each time we get a chance to go outside and use that as our training grounds. Not only makes me stronger, makes good memories.

So far this year 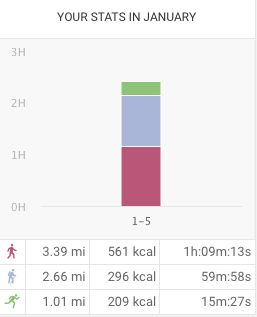 Am at just over 7 miles in training. HAPPY HAPPY & all with family.