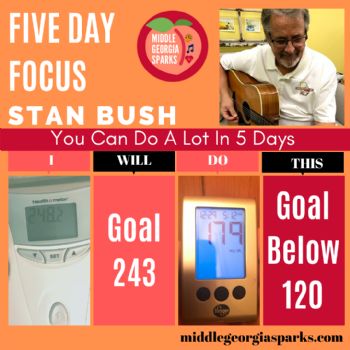 Then you know I got my timer going. It's something I just have to use.

Posting images of current situations, along with goals, is tough. At least it is for me. I'm just not that into putting it all out there in images. I'm more of a unicorn, rainbows, clouds and mountains kind of person. It's much easier to do that than to admit your current situation. Especially publicly. However, I know I have to. Why? One Word Answer.

That's it.. I want to be accountable for my goals again. I've been on and off this rollercoaster for 64 years. It's time to catch a new ride. At least for now. As you can tell by the numbers, I'm in some deep doo-doo. If I want to even have numbers in the next 5-10 years... I need to change them.

So that's it. That's my story and I'm stickin' to it. After I get this train rolling in the right direction, I'll even add some before and after pictures to it.