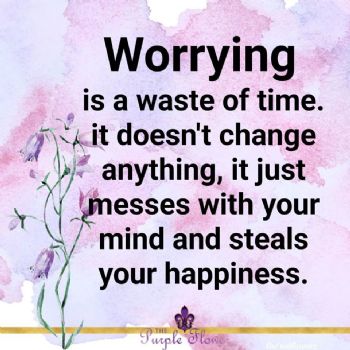 WORRYING is a waste of time.
It doesn't change anything,
it just messes with your mind
and steals your happiness.

Nonetheless, I spent at least one full hour worrying today.

Two of my daughters are identical twins, B & J.
About 2:30 this afternoon, J dropped me off at my place. She didn't mention any other errands or stops to make so I thought she was just heading home after this. The temps are sub-zero and feeling much colder due to windy conditions. There are many icy spots on the roads - more than one intersection had me fearing a failed stop! I've driven in these conditions over two decades.

At 2:50 B calls me asking when I last talked to J. Having shared with her that info, she then tells me she was talking to J, on speaker phone, when she was just a few blocks from me; J was frazzled some because a state trooper rushed around her, causing her to take a turn she didn't plan into an unfamiliar area. J then said OH... and the line went dead.

Attempts to reconnect with her failed so B called me.
I tried several times - calls & texts - no response - at all...
... not even to my rarely used Mom SOS text (used only when I'm alone and in need of immediate help, but not quite bad enough for 911).

B was trying still to reach J, and called me about every 10 minutes for updates.
She was feeling very anxious & worried something happened - something bad.
We tried to access her google account to 'find my phone' but she changed her google password a few days ago and neither of us knew the new one - so that idea didn't work.
We have a 360 app but her location was turned off - so that couldn't work.
We also have apps for driving details connected to our car insurance, but she hasn't completed the process yet - so that wasn't possible either!

40 minutes into this I called a very good friend to review the situation. I was concerned that maybe I was over-reacting, or being over-protective, or something in some way being more than a mom needs to be. It's hard letting go.
But in my defense, B & J are "special" - both being on the autistic spectrum (mildly), both having some neurological issues (dyspraxia) that makes a lot of motor movements 'different' or even difficult at times. They've come a long, long way in their 27 years. But honestly, most people they meet or come to know will say they seem like they are just teenagers, like 15, 16, maybe 17 years old. We are working on them becoming more independent but there are still so many lessons to learn. They were 19 before either was brave enough to learn to drive. We spent a good two years helping them learn and pass their driving skills tests. Even after all that, driving in difficult conditions can still frazzle & upset them pretty quickly. There are still many times they much prefer someone else to do the driving.

B was becoming very agitated as time passed. We only live a mile apart right now; but windchills make walking that a very bad idea! So I had to also keep reminding her to stay home! She was feeling so worried, so anxious, and I'm pretty sure that during her last few calls to check in with me she was in tears but trying not to let me hear that.

An hour into not knowing where J was, if she was safe, if she was hurt, knowing nothing & not having any way to know more...
... I sent a text to another daughter - the one that lives with me. C was at work - at a daycare - busy with snacktime and a bunch of toddlers. I knew a response from her might take a few minutes. But my worry was growing & I knew B was home alone & crying --- so I started searching for the phone number for the daycare center. Found it!
Was starting to enter it, to call, when B called again...

J IS HOME! SAFE!
Everything is fine! Car's fine! J's coming up the stairs! She's fine!

J called me minutes later to apologize for worrying me & making B panic & get so upset. She said she never got any calls or texts while she was out. Her phone dropped the call with B. J continued on her errands without giving it a second thought. She returned home not realizing B was so frantic & worried about her - until she got inside. She wanted to help B calm down before sharing any further details with me.

I texted C back to say 'nevermind' - she still hadn't responded. When she got home at 5:30 her first question was about the SOS I texted her - she didn't get the text until she got home. So I shared the whole story with her.

Now, a few hours of all this mulling around in my brain... I'm wondering if we might seriously need to find a different mobile/cell phone carrier. Maybe I'll review that issue in another blog.

At least we are all now home, safe & sound, and staying warm while the winter weather chills things down to sub-zero temps like -20 or -30 or so tonight! BRRR

Tomorrow, we get up and do it all again! First one has to be at work at 5am!
Whatever else we are, we are strong women! 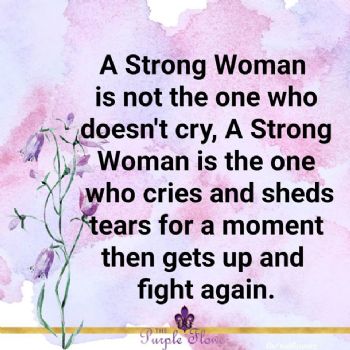