What a fun, busy couple of days in Seattle with Maegann. Both of us are extremely exhausted and thankful to be home. I had to talk Maegann through a few anxiety attacks, but she did great working through it and not letting it stop her.

Saturday after we arrived at the hotel we spent about an hour just hanging out in the lobby so she could do her makeup before we headed out for the day. We chose the Pikes Market area and first up was lunch as we were both hungry. Enjoyed some yummy fish at Farmers Grill. 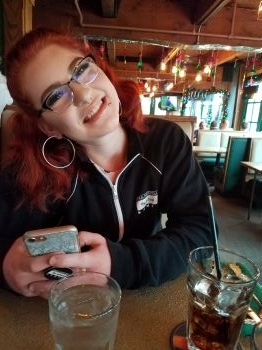 We then just started wandering around through the market and shops and eventually made it to the famous gum wall. 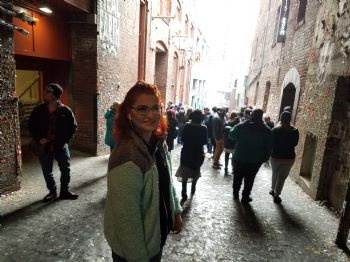 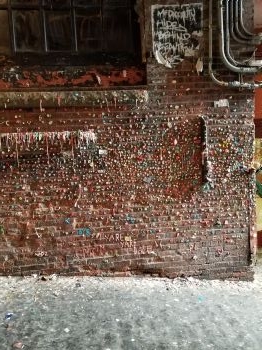 Upon first glance our thought was "eeww", but then you'd find the spots that had coins, notes, etc. stuck in the gum and stay interested. Still an "eeww" rating though! We then headed to the aquarium which was quite a hike and mostly down on steep roads. Then came the stairs. 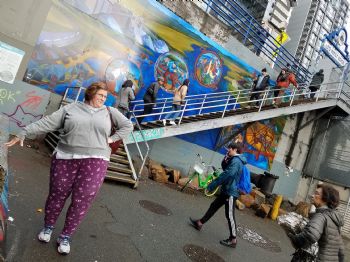 I survived! LOL The aquarium was a lot of fun. Great displays throughout and this one was in the main lobby. On the way out Santa had joined the other diver for a "story time". 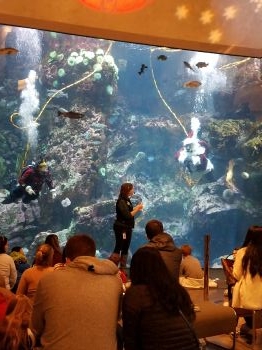 Then we had UBER come get us and take us back to the hotel. After we got settled Maegann started checking into DoorDash for our supper. There was nothing near the hotel for meals. We chose Chipotle and watched Family Feud and Friends while we enjoyed out dinner. Enough leftover for breakfast too.

Sunday morning we slept in and then set out walking about 10 for the Seattle Center. First up was finding the Starbucks and we enjoyed our warm drinks in the Armory. 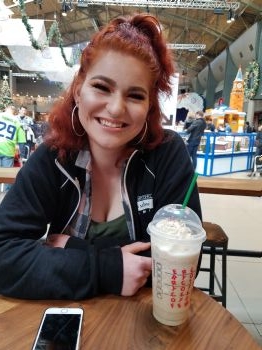 Before we left there was a group of elementary age kiddos playing violins and cellos for everyone. Pretty Christmas music. We then walked to the glass blowing museum and there were some amazing pieces there. 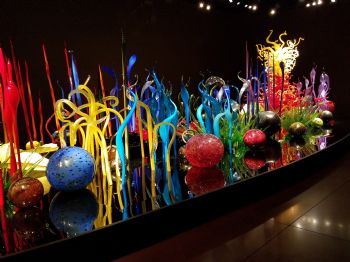 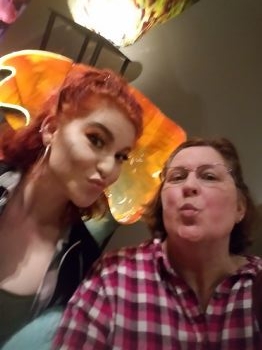 And then came Maegann's largest anxiety creator. The Space Needle. 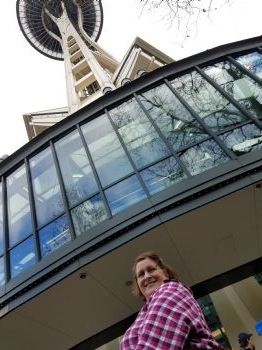 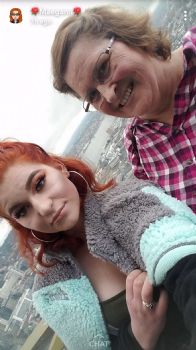 I was proud of her for conquering a fear! She even made her way onto the rotating glass floor! 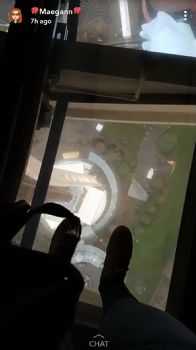 Maegann had been having major problems with her phone losing charge and we had lots of pictures left to see so we walked to T-Mobile as she'd been wanting to switch from Verizon for awhile. We took several breaks for me (darn knee), but this was a fun one at the Olympic Fountain. 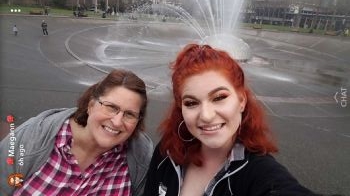 And once we finally got to the store I got a nice 45 minute break (or longer) and watched the Kansas City game while I waited on Maegann to get her stuff all finished. 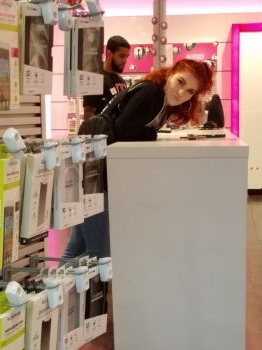 After we knew how far we had walked (over a mile one-way) we agreed to have an UBER come and take us back to the Modern Pop Museum. It was one of the places we were most excited to see, but it was the one that disappointed in the end. 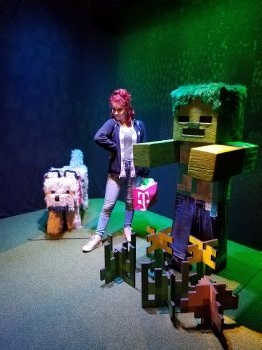 The area that held Fantasy, SciFi and Horror was closed for a special event. That's a huge chunk of the place and the one area we were most interested in as well as the new Minecraft exhibit.

By the time we were finished it was dark and I didn't want us walking the streets back to the hotel alone so UBER was scheduled once again. While waiting I got a photo of the entry area as I thought this Christmas tree was so pretty. 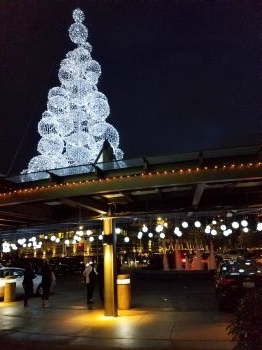 Once back to the hotel I was dead. 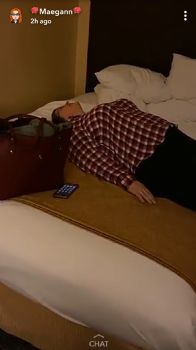 Maegann called Jeff and they talked for awhile and then she did another Chipotle DoorDash. We had planned to eat dinner at a place called Collections just outside the glass museum, but they too were closed for a special event. We were getting tired of hearing that! LOL

We spent the evening watching Family Feud and then Idiotest. I fell asleep about 11:30 and didn't move until 8am. Yep, slept practically sitting upright in bed. I told you I was tired!

We got checked out of the hotel by 9:15am and took the hotel shuttle to the airport. We were at our gate by 11 with Starbucks in hand. 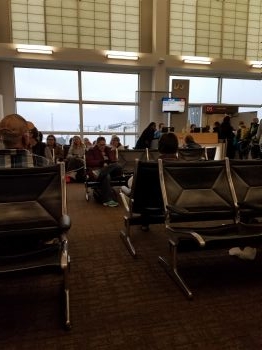 Flight was about 15 minutes late, but the pilot made up the time in air. 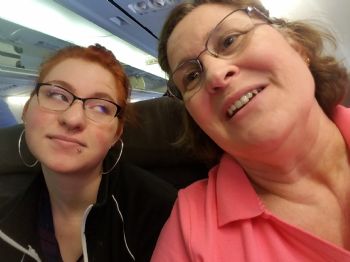 We were able to say hi/bye to Tim at baggage claim. He should be landing in Reno anytime for a short 2-day trip as he has to be here Thursday for my out-patient surgery.

After we got home Maegann left to pick Jeff up and he was here until about 8pm. I enjoyed listening to them singing songs and Christmas carols while taking turns playing the guitar. I even turned Criminal Minds off so I could listen. Isaac asked if we could stick to our routine of pizza on dad travel day so I did order that for everyone. Maegann came home with an early Christmas present as Jeff couldn't wait. 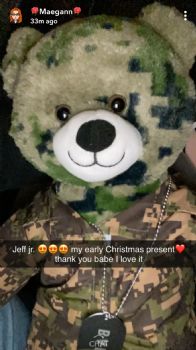 An army Build-a-Bear they named Jeff Jr. That's going to be Jeff's life for many years.

Tomorrow I will do a couple loads of laundry, go through paid work emails, work on Bible study lessons and clean out the refrigerator so I can see what is there to work with for supper. I do have a doctor appointment at 4:15 with the primary care to make sure meds are okay and see how I'm doing after all the tests. Hopefully I won't have to wait for her too long as the appointment itself will not be very long. Main thing I'm NOT doing. Walking to the doctor's appointment! LOL

For now, I am enjoying The Voice. Doubt I'll make it very long tonight.
Share This Post With Others
Report Inappropriate Blog
Member Comments About This Blog Post