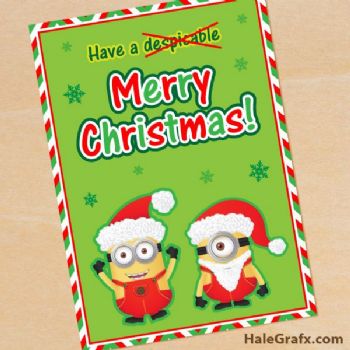 Christmas Card Day
Christmas cards, and the man who is credited with coming up with the concept for a commercial Christmas card, Sir Henry Cole, are celebrated today. Because he didn't have time to write all his family and friends at Christmas time, Cole, a worker at the Public Records Office in London, commissioned artist John Calcott Horsley to design a card for him, which Horsley did while living at Orestone Manor, near Torquay, in the United Kingdom. This first card, created in 1843, had a picture of a family celebrating Christmas together while drinking, flanked by images of people giving food and clothing to the needy. Below, the phrase "A MERRY CHRISTMAS AND A HAPPY NEW YEAR TO YOU" was inscribed. As the cards worked well for Cole, he had a thousand of them printed, which were sold for a shilling each, making them the first mass produced Christmas cards. In 2001, one of the original cards, which was signed by Cole himself, fetched over $30,000 at auction. It is believed that about a dozen of the original cards survive today. One of them can be viewed at the National Art Library inside of the Victoria and Albert Museum, a museum where Henry Cole was the first director.

Louis Prang, who was a print shop owner near Boston, is known as the father of the American Christmas card. His original card, created in 1875, was much more simplistic than Cole's; it consisted of a flower and the words "Merry Christmas." Many of the first generation American Christmas cards consisted of pictures of animals, nature, and scenes from the winter months, and by the 1880s Christmas cards were an important part of the holiday season. This was spurred by advances in technology and the mail service, industrialization and a move away from family farms, and a desire to keep in touch with family members across the country.

By some accounts, by the end of the nineteenth century many Christmas cards were being poorly produced, and contained overly sentimentalized images. But quality artistry began to rise again as competitions held by card publishers gave cash prizes for innovative designs. Technology continued to improve as well, and cards began to resemble photographs. The range of themes increased, and included subjects such as sports, landscapes, and patriotic drawings of men in regimental uniforms. Christmas cards became so popular that they began to be collected, and each year they were reviewed in newspapers, similar to how films are reviewed today. By the late 1920s, about 40 factories employed roughly 5,000 workers in the Christmas card business in the United States.

In 1915, Hallmark published its first Christmas card. They adopted the format of four inches wide, six inches high, folded once, and made to be inserted in an envelope. This is the format that became the standard, and by the 1930s, and for the next few decades, popular cards of this type regularly had red suited Santas and stars of Bethlehem on them. Hallmark commissioned cards from Salvador Dali, Grandma Moses, and Norman Rockwell. Their 1977 card, "Three Little Angels," is the most popular Christmas card of all time, with 34 million cards sold.

Throughout the twentieth century, Christmas cards became even more popular as they were tied to charitable giving. By the 1940s, many nonprofits were raising money by selling cards, the most well known being the United Nations Children's Fund (UNICEF), which raises money for children around the world who need things such as clean water and vaccines. The first UNICEF card was issued in 1949, and was drawn by a seven-year-old Czechoslovakian girl whose village had received assistance from UNICEF following World War II. Today children still design UNICEF cards by participating in a contest, and professional artists also donate images for UNICEF cards.

The tradition of Christmas cards continues to change in the twenty-first century. New printing methods allow mass-produced custom cards. Pop up, video, and audio cards have found an audience, as have other specific types of cards. Holidays such as Hanukkah and Kwanzaa now have cards made for them as well. Emailing instead of mailing cards, and quickly creating cards on a computer have both gained in popularity, and with the rise of social media, more people are abandoning Christmas and holiday cards altogether. Still, Americans purchase about 1.6 billion Christmas cards each year.

Celebrate the day by buying or making your own Christmas cards and mailing them out to family members and friends around the country. If you can't choose which type of card to send, maybe you could get some replicas of Cole's first Christmas card. The day could be spent learning more about Christmas cards by reading Christmas Cards by Michelle Higgs, or The History of the Christmas Card by George Buday; exploring Handmade Christmas and holiday cards from the Smithsonian's Archives of American Art; or by perusing White House Christmas cards through the years.

Did You Know ~
I need to get a Transformer for my son for Christmas but it's sold out. I am an optimist primarily so I remain hopeful.
Share This Post With Others
Report Inappropriate Blog
Member Comments About This Blog Post