A few days off from our consignment gallery...I LOVE IT!

How was your Thanksgiving? Mine was nice but I did feel a little like a fish out of water. I imagine this will be my fate throughout the holidays. I've been such a 'twosome' with my dearly departed hubby for so many years...there is really no other way to feel.

The hostess who is a long-time friend of our original group of friends is a GREAT cook so the Thanksgiving spread was totally delicious. I'm happy to say that I didn't overeat and I have no left-overs so there is no fear of that.

I have to admit I feel a little awkward around this group. The hubs and I were friends with them for some 30 years and a few years before Don died we had pulled away from them for about two years. It's funny how people change and evolve. Don and I changed radically when we lost our beautiful 22-year-old son back in 2006. All of the crazy superficial things that were so very important to us...and keeping up with the Joneses fell away literally overnight.

Of course, the big group of wealthy friends we had associated with for so many years didn't change at all...so the values that held us close to them changed immediately.

I started getting annoyed with their superficial lives and the idle chatter and bragging about their 'stuff' just seemed a big waste of time.

When Don was in Hospice I did a post on Facebook that if they ever wanted to see him again this would be their last chance and amazingly they all came to Hospice for many visits to honor him. As well they should!

Don was one of the most amazing caring, non-pretentious men on the face of this earth. He is missed so much by everyone...especially me and I know it will be this way for the rest of my life.

Don did teach me something so very important..he told me right before he passed "Bobbi, you need friends. Don't shut people out of your life that we have known for decades. Just remember people can only give you what they have to give. If they can't give you what you need...keep looking until you find those that do!"

Smart, kind, and beautiful. That was the husband I was lucky enough to be married to for 41 years and know for 42 years.

Everything about him was pretty wonderful except for his rotten mom and his hateful sister. We could NEVER agree about his mother. He was loyal to her as good sons always are even though she didn't deserve a shred of it. Donnie was raised by his grandmother as his mom was out prowling the bars bringing home various men that were creeps.

His sister tried to talk him out of marrying me telling him horrible things that were untrue. They would do ANYTHING to prevent him from finding someone he loved intensely that would take away from the attention they both though they and ONLY they deserved.

I have to tell you if we hadn't moved to FL about 1700 miles away from Iowa our marriage wouldn't have survived the first year.

His mom was SO manipulative and intrusive in our marriage with her demands and her crazy devious treatment toward me that I would have cut him loose just to get away from her!

I can't even go into all of the rotten to the core things she did over the years. Believe me that could be it's own book called 'The Mother In Law from Hell!'

To this day she 'phone stalks' me trying her best to dump all of her toxic complaints and whining on me now that her son...her whipping boy...is no longer here to endure it.

I'll NEVER understand why he didn't stand up to her. NEVER EVER! It will be one of the great mysteries on mother/son relationships that still needs to be analyzed in a psychology book.

My grief counselor told me once that the more neglected and abused a child was growing up sometimes makes them try their best to seek out that parent's approval as an adult.

I received an e-mail from one of Don's good friends in Iowa that Debbie (Don's sister) had called him complaining that I had not sent the C.D. of Don's memorial back to them and they were very sad about that.

HUH? This is the same sister that told me she didn't want a C.D. of the memorial because if they couldn't be here for the memorial it wouldn't matter to them anyway.

Amazing that they would NEVER consider getting on a plane to come down here for the memorial but then suddenly THAT also becomes my fault.

She also went as far as to tell me that Donnie would NEVER want me to spend the money on his memorial...that he would want the money I would spend on that to go to THEM!

I about dropped the phone. Honestly I did! These women...you just can't please them no matter if you stand on you head, clapping your hands while spinnng plates with your feet.

So I let his friend know the full story. I told him that after I considered the years and years and YEARS of abuse I took from these women I decided not to spend the money on the C.D. to send back to them. I told him it wasn't my fault that they live under a rock and don't even have a computer so they could see the link I posted on Facebook.

I just refuse to let them ruin my life and harange me with guilt and manipulation the way they did to their son and brother,

I am sorry that his mother had a stroke a few weeks ago and from what I hear can only move 2 fingers on one arm and has to use a wheelchair to get around.

She probably worked herself up so much this happened because she can't control and manipulate me. Everyone has ALWAYS bowed down to Shirley.

At first, I felt very guilty about shutting them out of my life... but then I remembered this. 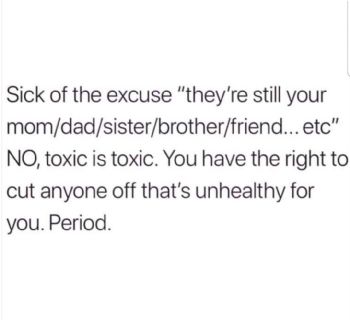 I hope it rings true to ANY of you...my beautiful friends who think you must bow down to people simply because they can claim horrible treatment is allowed towards you because they are so called 'family'

There has been NOTHING family like from these two women from the day I married their son and brother. NOTHING.

In fact I hate to say it...but sometimes karma presents itself in front of your very eyes to those who deserve it. His mother has ALWAYS been a whiner, a complainer, a guilt controller...now maybe she has a reason to be that way.

All I can do is pray for his sister...I can't even IMAGINE living with someone like his mother for the entire 65 years of her life. She has never dated, never had anyone in her life, never married...it's been all about mommy dearest ALL the time. God bless her soul.

Whew...feels good to let ALL of THAT out! Sorry to unload my feelings...I think I have a lot more counseling before I ever figure this sorrowful situation out.

I am proud of myself for not letting her suck me in her cesspool. I have so much anger towards her for hammering her poor son and I have perplexion towards him that he let her intrude in our marriage by always taking her side on things. It's a great mystery to me...indeed it is!
Share This Post With Others
Report Inappropriate Blog
Member Comments About This Blog Post